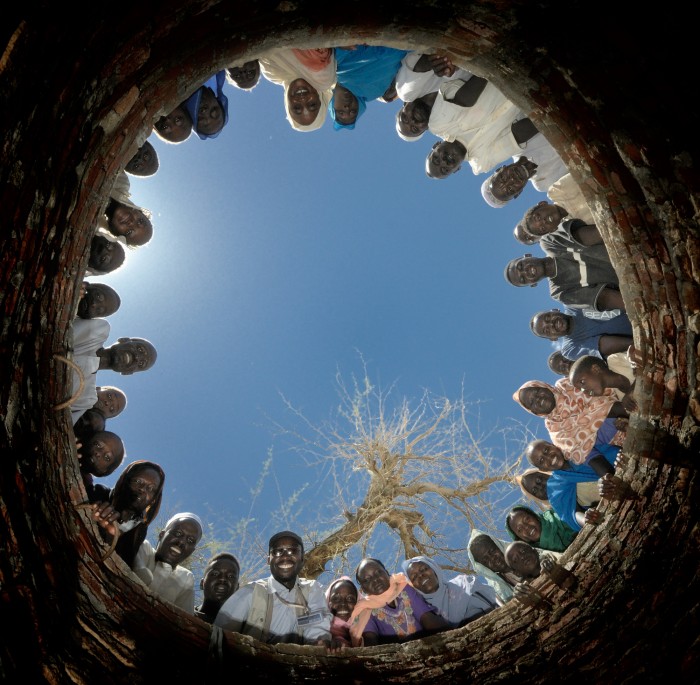 It takes a village to build a well. Residents of the Khamsadegaig Camp for internally displaced persons look down a well they built with help from the Darfur Emergency Response Operation, a joint program of Caritas Internationalis and ACT Alliance. The Catholic and Protestant aid networks have pooled their resources since 2004 in order to help some of the 2.5 million people displaced by violent conflict in Sudan’s western Darfur region. Photo: Paul Jeffrey

For example, according to James Wood[1]  ‘The creation of humankind in the image of God is, in fact, the foundation  of  all  human  rights,  for  human  rights  are  located  in  the  nature  of  God’.

The understanding that human beings irrespective of their race, gender, age, nationality, social economic status or any other categorization are bearers of the imagine of God, and therefore deserving of justice, dignity and rights.

As the world commemorates tomorrow the Human Rights day, two things come to mind: the increasing recognition of faith based actors as contributors towards the full enjoyment of human rights throughout the world, and the equally increasing vulnerability of communities and people to violation of their fundamental human rights as a result of violent conflicts, climate change and other causes.

The two scenarios above present opportunities and challenges. It is quite clear that our faith resources including narrative, leadership, constituency and our influence towards the economic and political life of society could contribute significantly to achieving human rights. It is absolutely critical for faith-based networks like ACT Alliance to raise their voices in opposition to human rights violations. In addition, churches and church based networks should increase their efforts of solidarity and support for the people would are affected by human rights violation.

With the unbelievable pain and suffering affecting millions of people fleeing war and conflict for example in Syria, Iraq and South Sudan and other places; the millions of women affected by gender based violence; and the many communities denied rights and livelihoods as a result of the impacts of climate change, the voice of churches and faith based organizations should rise higher and higher, until no one is left behind.

In addition to raising voices in support of human rights and justice, real and concrete action is required in order to challenge those in power and to support the most vulnerable. On this year’s human rights day, we celebrate the heroes of faith who work daily at community and international levels, fighting for the rights of the most vulnerable. We also celebrate human rights defenders who remain steadfast in their mission in spite of the threat they face.