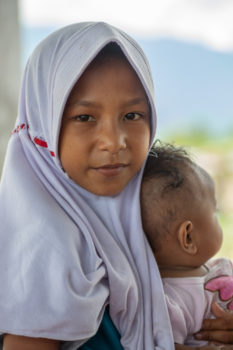 10 year old Kirana (name changed) looks after her cousin to help her family. She attends a mobile clinic by ACT member Pelkesi after the September 2018 Central Sulawesi earthquake destroyed buildings throughout her village. Photo: Simon Chambers/ACT

On September 28, 2018, ten year-old Kirana (name changed) and her friends were at the mosque, preparing for evening worship when everything began to shake.  The walls began to collapse all around them, and they ran as fast as they could.

Kirana wanted nothing more than to get home where her family was.  She was scared and worried about them, and wanted to be with them.  She cried out to people and to God as she ran from the mosque.

Hundreds of other people were also running from buildings, looking for safety during the violent earthquake.  As she ran past one building, the wall collapsed and masonry struck her in the head.  She collapsed, and thought she was going to die.

But a woman took her hand and pulled her to her feet.  Together, they ran until they reached the central yard in their village.  Here, she waited until the earth stopped shaking, together with many of her neighbours.

Soon after the earth stopped shaking, her sister came to the yard looking for her.  They hugged, crying, and left the village for the nearby fields where the rest of the family had fled for safety.

No sooner had they arrived than they had to flee again- running up the hills to higher ground.  Because the earth began to collapse and move underneath them.  Liquefaction had begun, and entire houses just flowed along with the liquid ground, some ending up hundreds of meters away.

Kirana and her family were safe, although their house had collapsed and their motorcycle was crushed.  As they calmed down, Kirana began to feel the pain in her head.

It took a few days for the road to be rebuild enough to be safe for relief teams to come to Kirana’s village.  ACT member Pelkesi sent a doctor and health workers to take care of people in the temporary camp they had built. Kirana was one of their patients.  They treated her injury and gave her medicine to complete the cure.

Today, Kirana is all better.  She helps her family by looking after her baby cousin when the rest of the family is busy.  She is back in school with her friends.  And she is free to dream again.  Her dream is to grow up to be a police woman.  “Our lives will never be the same after the disaster,” Kirana said.  “Living in the camp is never easy.  But thank God we are all safe, and things are improving!  May God help us and may there be no more disasters in Palu!”