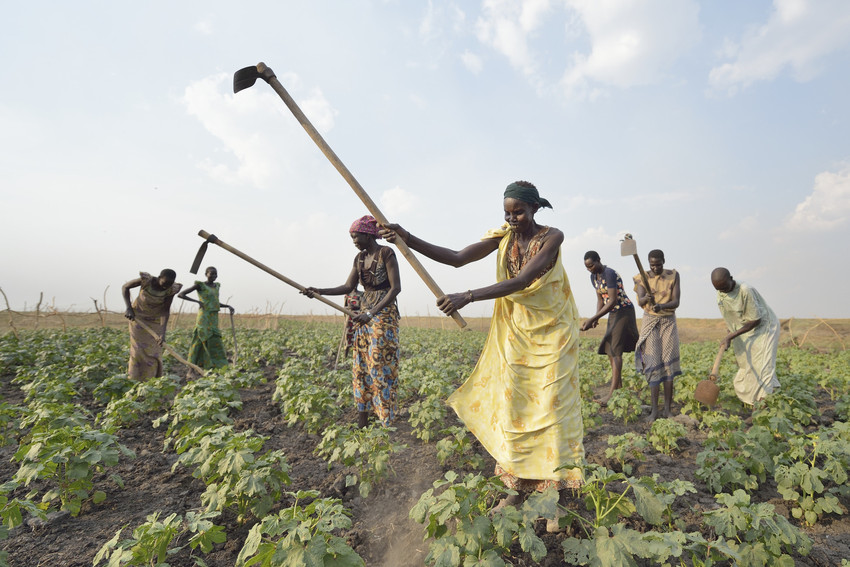 Adhieu Deng Ngewei and other women work together in a community vegetable garden in Dong Boma, a Dinka village in South Sudan’s Jonglei State. They face serious challenges in rebuilding their village while simultaneously coping with a drought which has devastated their cattle herds. ACT Member The Lutheran World Federation is helping the villagers restart their lives with support for housing, livelihood, and food security. South Sudan. Photo: Paul Jeffrey/ACT

In this day and age, famine cannot be tolerated, not just because every human being is valued in God’s sight and has the right to eat but also because starvation singles out the weakest and most vulnerable from among us.

It is the moral duty of wealthy nations to do all they can to provide life-saving funding and assistance and to work to end the underlying conditions that drive starvation: conflict, poor governance and climate change.

Last Sunday more than one billion Christians were called to take part in a Global Day of Prayer to End Famine. We as signatories helped lead that global event because we believe that this crisis demands our prayers and that governments, society and people of faith must act.

The current crisis is happening against a backdrop of worsening hunger. The number of people needing food assistance has risen by 35 per cent in the last year, from 80 to 108 million people. This appalling statistic flies in the face of global commitments to end poverty and hunger by 2030 and suggests that while things are improving for the vast majority of the world, things are worsening for the already worst off.

Humanitarian organizations – and our church members on the ground – are warning of catastrophe. In East Africa hundreds of thousands of people are now on the move, fleeing starvation and conflict or displaced across borders into hardscrabble settlements. Uganda now hosts the world’s largest refugee camp – Bidi Bidi, with more than 270,000 people. Every day thousands more South Sudanese arrive in Uganda, among them hundreds of unaccompanied children whose parents have been lost or killed. Food aid is desperately short.

In Somalia, hundreds of thousands have fled the dry lands where drought has destroyed whole herds of livestock and left villages with nothing to stay for. Aid workers report of mothers losing their children to hunger and thirst on the long trek to find food and water.

Cholera, diarrhea and other diseases are also killing children, their weakened bodies unable to cope with what otherwise is treatable. They and their families are dying silently in remote villages, on the march to find help, or trapped in conflict kill zones, where they are subject to bombings, kidnapping, rape and violence. Children are paying a particularly heavy price.

The last time that the world heard of famine was in 2011, when 260,000 Somalis died – half of them children. The situation is worse now. The UN says it has not seen a humanitarian crisis of this scale since 1945. Even though we know the trajectory of this crisis, the response is far too slow. Why is it that we only respond when death is staring us in the face?

This is why this crisis demands inspirational leadership from the G7 heads of state. Their leadership is needed to drive action in three areas.

First are commitments for the money required to fund life-saving aid. These include, along with food assistance, the therapeutic treatment and supplements children need to bring them back from the brink, deployment of water trucks to provide clean drinking water, and health and sanitation interventions to halt the spread of deadly diseases. So far only $1.6 billion of the $4.9 billion needed has been received. The rest is needed now. Any commitments must be converted into disbursements.

Second, commitment is needed to the hard work of addressing the drivers of conflict and injustice. This means consistently engaging in the world’s toughest and most dangerous places. Nations and international agencies need to resolve to foster peace before conflicts break out; hold governments accountable for perpetrating human rights abuses and escalating, rather than de-escalating conflicts; partner with governments to build institutions, civil society and the rule of law; and fund programmes that help the poor deal with climate change.

The G7 must reject the ideas of those who call for less intervention and for clawing aid money away from humanitarian and development work. More, rather than less, is needed if the cancerous effects of injustice, displacement and isolation are to be averted.

Finally, we pray that the G7 leaders will inspire all governments to stand with the world’s most vulnerable to bring about the same kind of improved prosperity that hundreds of millions of people have already experienced. The famine crisis we are now witnessing is the death rattle of extreme poverty. It requires the continued political will, engagement and funding of governments and their citizens to end it. Now is the time to save lives and get on with the job of eradicating this scourge.