Gender and Poverty: When will we get it right?

Earlier this year, the Canadian government launched its Feminist International Assistance Policy.  This October, several ACT members, along with staff from other civil society organisations, and university faculty and students, gathered at an event organised by ACT member The Primate’s World Relief and Development Fund at Wycliffe College in Toronto, Canada for an event entitled Gender and Poverty: When will we get it right? 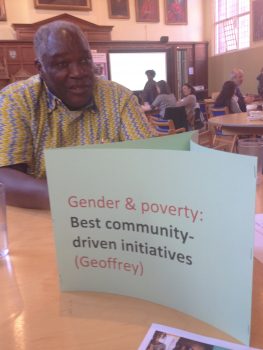 Four panelists presented over the course of the afternoon- two from PWRDF implementing partners in Rwanda and Tanzania, one from ACT member World Renew’s Kenya office, and one from York University.  Each had their own focus on the role of gender equality in poverty alleviation.

Jolin Joseph, a PhD candidate from York University, spoke about Engendering Migration Research and Praxis.  “Poverty is more acutely felt by women and women-headed households,” she told the audience as she began to talk about her research into gender and migration in India.  An example of this is that more women are in the work force, but there has been no economic gain for their presence.  The prevalence of deskilled, low-paying, informal work for women has led to more time being spent on paid employment for the same economic gain.

The Rev. Geoffrey Monjesa from the Anglican Diocese of Masasi in Tanzania, one of PWRDF’s implementing partners, talked about systemic sexism.  “Gender inequality is built into the organisation of marriage and families, work and the economy, politics, religions, the arts and other cultural productions, and the language we speak,” he said.  Rev. Monjesa spoke of one woman in their food security programme who, in the span of five years, had gone from being a vulnerable divorced mother to running a farm that employs 20 labourers working on 25 acres of land, and to being elected as a district councillor, reflecting the value that the community places on the skills she has developed through the programme and her willingness to share them with her neighbours and community.

Jenninah Kabiswa from World Renew’s Kenya office spoke about the link between peace, gender and development, drawing on a variety of conflicts in Kenya including border issues, resources, politics and inter- and intra-tribal conflict.  “Women play a key role in peace,” she said.  Their communities place high expectations on women, so World Renew and other agencies keep building their capacity.  “Women are central, to the SDGs, to Canada’s feminist international assistance agenda, and to peace.” 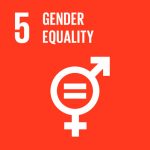 Finally, Dr. Evrard Nahimana of PWRDF partner Partners in Health in Rwanda spoke about the Rwandan experience of gender equality, pointing out that 64% of Rwandan parliamentarians are women, the highest percentage in the world.  He also spoke about how a focus on maternal, newborn and child health had helped to drastically decrease the maternal mortality rate in the country between 1990 and 2015 thanks to improved care at medical facilities and removed barriers of access.  He then talked about the benefits of women moving “from patient to producer” and how food security- the provision of training and livestock and seeds helps women to increase their income and overall health.  “Invest in women and the whole family will benefit,” he said.The conversation at the event helped to contribute to the continuing dialogue in Canada about the new Feminist International Assistance Policy, as well as to how these agencies and programmes contribute to SDG 5: Gender Equality and Women’s Empowerment.