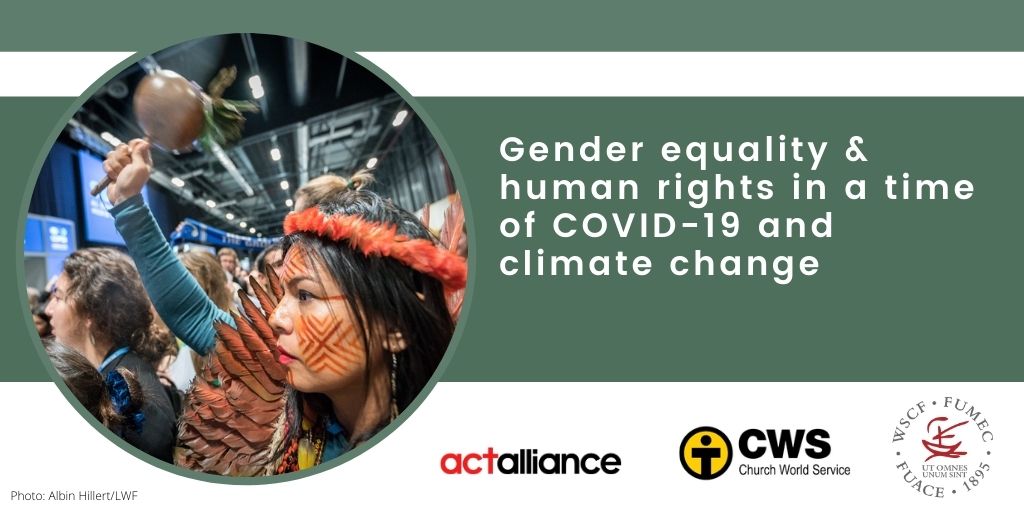 For ACT Alliance, the fight against climate change is a fight for justice. “It is clear in the work we do that climate change impacts along with the COVID-19 pandemic have disproportionately affected women, indigenous groups, and human rights defenders,” says Jasmine Huggins, co-chair of ACT Alliance’s Climate-Gender and Human Rights team.

Mary Obiero of Church World Service Africa explored the connections between gender and climate change in the context of COVID-19. “The effects of the pandemic could reverse the limited progress that has been made on gender equality and women’s rights,” she said.

“The situation has deteriorated. With schools and borders closed and restrictions on movement, there has been an increase in old, bad traditions i.e. forced marriages, teenage pregnancies, Female Genital Mutilation (FGM) and other forms of gender-based violence,” said Obiero. Despite the challenges faced by women, Obiero emphasized, “women are not only victims but also powerful agents of change, and possess specific knowledge and skills to effectively contribute to climate adaptation and mitigation”.

Alexandre Pupo Quintino of KOINONIA and the ACT Brazil Forum shared insight into the situation faced by local communities and indigenous peoples with regards to climate justice and human rights.

“Brazil is burning, both in terms of the forests and the local communities,” he said. Since 2019, Brazil has seen an increase in fires in the Amazon. The fires are mainly on indigenous lands and conservation areas. “In the first six months of 2020, 3 000KM2 of amazon had been deforested,” said Pupo Quintino.

“Apart from the immediate risks associated with the fires and deforestation, we can’t forget that these communities have a precarious social status in Brazil,” said Pupo Quintino. The dismantling of environmental policies and the environment itself puts the survival of those who rely on it at risk.

Tara Daniel of WEDO, in partnership with Tebtebba, the Indigenous Peoples’ International Centre for Policy Research and Education, provided insight into the Local Communities and Indigenous Peoples Platform (LCIPP), the Lima Work Programme on Gender (LWPG), and the Gender Action Plan (GAP) within the United Nations Framework Convention on Climate Change (UNFCCC). These mechanisms intend to proceed the work related to indigenous peoples rights and gender equality in the context of climate change governance.

Many CSOs, including ACT Alliance, WEDO and others are working to shift policymaking to influence the negotiations to be centred on human rights. “We are trying to set normative expectations for the defacto inclusion and participation of indigenous peoples, and people of all genders, especially historically marginalized people and those on the frontlines of climate change,” said Daniel. Daniel noted that although there have been some successes in ensuring gender-just approaches, there is still a lot of work to be done.