Highlighting protection for migrants and refugees 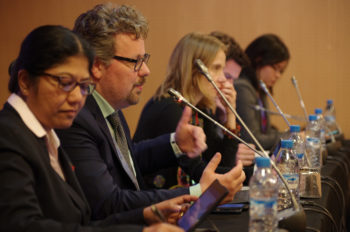 ACT’s Christian Wolff speaking as part of a panel during a side event during Migration Week in Marrakech, Morocco. Photo: Simon Chambers/ACT

There are 65.6 million forcibly displaced persons including over 22.5 million refugees in the world today. The number of refugees is growing while the national laws and attitudes towards refugees and migrants are becoming more stringent. To address the legal gap over burden-sharing of refugees and migrants over 180 UN member states gathered in Marrakech, Morocco on December 10, 2018 to adopt the Global Compact on Safe, Orderly and Regular Migration (GCM)  as foreseen by the 2016 New York Declaration.

The GCM is one of two compacts being adopted this year by the international community that relate to people on the move.  The other, the Global Compact for Refugees (GCR), is expected to be adopted this month as well.

ACT has been involved in advocacy around both compacts, and has currently been in Marrakech for Migration Week – consisting of the annual the Global Forum on Migration and Development (GFMD) and the International Conference to adopt the Global Compact to adopt the Global Compact for Safe, Orderly and Regular Migration (GCM).  During the weekend tying together both occasions, ACT co-hosted, with the Asia Pacific Refugee Rights Network (APRRN), a side-event which brought together representatives from governments and civil society to discuss the issue of protection of people on the move in the context of the two Compacts.

“The migration Compact is a proactively rights-based document, which covers a broad range of issues including forced displacement and climate,” said Christian Wolff, ACT’s Programme Manager for Migration and Displacement.  The goal was for the GCM to complement the GCR, which is designed to be a more technical and non-political instrument, and looks at the amount of humanitarian financing that is available, especially for countries that host large numbers of refugees.

The conversation about the two Compacts has now come to focus on how to implement them.  “We now have two non-binding instruments to help governments to implement better protection for people on the move.  What are some of the issues that are common between the compacts and where it would behoove governments that are looking at implementation to say ‘can we do a planning and matrix over these documents to see where it makes sense for our ministries to work together?’”

Following remarks by the Holy See about the protective aspect of service provision for people on the move, representatives from the governments of El Salvador and Sri Lanka  spoke about their concrete work regarding the planning of implementation. 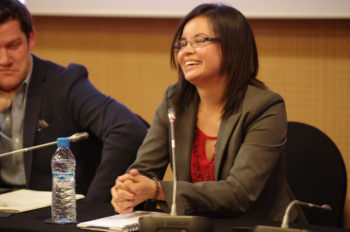 Yessenia Lozano from El Salvador presenting at the side event. Photo: Simon Chambers/ACT

Yessenia Lozano, representative of the government of El Salvador, underscored that implementing the GCM is a priority for El Salvador.  “We like to be a couple of steps ahead, never behind,” she said.  “The GCM is just a package.  It is not legally binding, but it is politically binding.  Something good is possible to do when you have the political will.  In El Salvador, the migration topic is very crucial- almost 30% of our population is living abroad.”  The topic of Citizens Abroad is a cross-cutting issue throughout the Salvadoran government.

Lozano underscored the human element of migration as well.  “When you see a migrant, you have to see it as a family- as a family who is behind [at home], and a family who may be started in the destination.”  Remembering the humanity of the 3 million Salvadorans who live outside the borders of their country helps to underscore the importance of protection for migrants.

Samantha Jayasuriya, from the Permanent Mission of Sri Lanka to the UN in Geneva, talked about joint regional work around protecting the rights of migrants and refugees in Asia through bodies including the Colombo Process, which brings together 13 countries in South Asia to discuss protection issues for migrant workers.  The Colombo Process has also worked with the Abu Dhabi Dialogue, bringing together 7 destination countries in the Middle East and 13 sending countries in Asia on these issues. Key elements of this work are are ensuring that migrants are informed before they take jobs, that returns and reintegration are considered, that recruitment is ethical, that skills are matched between employers and workers, and that technology is used to ensure a more transparent recruitment process.

A number of civil society members also spoke, including Refugees International (on the need to utilise the GCM for implementing initiatives that protect people displaced by the effects of  climate change), Caritas Internationalis (on civil society and faith-based initiatives to enable access to services), and the Mennonite Central Committee (MCC) (on mixed migration challenges in Central America).  Kati Garrison of MCC underscored the importance of implementing the GCM in collaboration with civil society on the ground.  “We’ve talked a lot about local level development initiatives, especially in terms of economic and livelihood projects to prevent migration. But no matter how fantastic our small-scale economic development initiatives are, we need to look at also addressing the higher-level government infrastructures and support,” she said.

The event provided a chance for governments and civil society to come together, to share ideas and best practices, and to explore what the GCM will mean as it gets implemented in the years to come. An important goal was to bring home the importance of improving migrants and refugees themselves in national planning initiatives, and this message was well received by governments present.

Jayasuriya summed it up nicely: “The GCM is blowing some fresh lease of life to ailing multilateralism.  At the same time, adoption of GCM is not the end.  It is the beginning.”