“It is no longer a good place to live.” Families relocate after Cyclone Idai 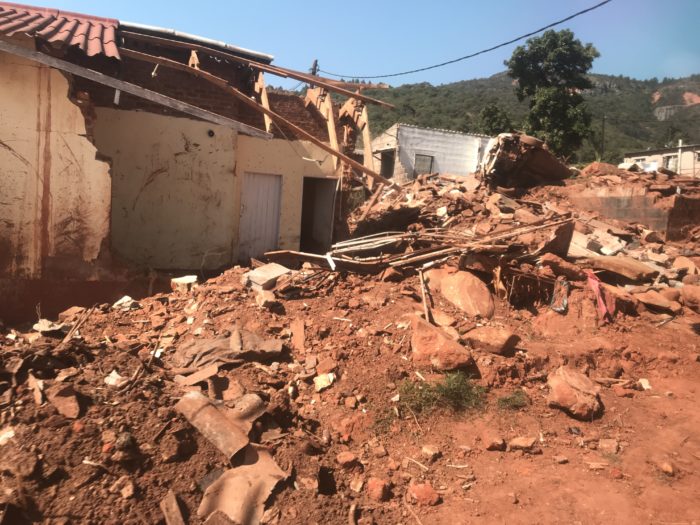 Landslides triggered by Cyclone Idai devastated the village of Ngangu in the mountains of Zimbabwe. ACT member Lutheran Development Services’ local partner has provided food, hygiene, non-food items, and other support to survivors of the cyclone in the district. Photo: Simon Chambers/ACT

Cyclone Idai devastated large parts of Mozambique, Zimbabwe and Malawi when it made landfall in March 2019 in the city of Beira, Mozambique.  When the cyclone had passed on, much of Beira was underwater and severely damaged.  While the media continued to show the images of the devastation in Mozambique, Idai continued to track inland, into the mountains of Zimbabwe, where it touched off landslides and caused flooding that killed hundreds of people and affected tens of thousands more.

The district of Chimanimani was one of the worst hit in Zimbabwe.  Located in the mountains an hour’s drive from Mutare, over roads that have had many sections washed away by the landslides.  Red scars mar the surface of the mountains, breaking up the lush green of the forests that blanket their slopes.  These scars were caused by the landslides that tore the ground cover off the mountainsides and brought boulders, mud, and trees crashing down through the forests, communities, and roads below them.

The village of Ngangu lies right in the path of some of those landslides.  About 50 people died, and scores were injured as the landslides poured through the town overnight. 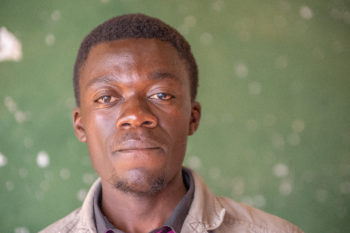 21-year-old Vision Chinamira survived the landslides triggered by Cyclone Idai in his village of Ngangu, Zimbabwe thanks to the help of his father, who dug him out of the rubble and debris when water, mud and boulders crashed through his bedroom walls. Photo: Simon Chambers/ACT

Vision Chinamira, 21, has lived his whole life in Ngangu.  He is studying human resources management, and wants to work as an administrator in the mines nearby.  “On the 15th of March, there were heavy winds.  We’ve never had as strong winds since I was born,” he said.  “It rained all day.  The power was out.  We heard a strange whistling sound, and went inside to make dinner.  We were in bed by about 7pm.”

“An hour later, I heard big banging sounds.  All of a sudden, the garden wall around our neighbour’s house burst and all the water and rocks behind it crashed through my bedroom wall, trapping me under mud and rocks.”

“I called for my dad, and he came and pulled me out of the mud, rocks and cement.  We opened the door to our house, and to the right, everything looked the same, but to the left, all the houses were gone.  Three rows of houses- gone.  No foundations, no kitchens- everything was gone.”

Vision and his father went to the Methodist church in the village and spent the night there with others who had fled the landslides.  The rain lasted for three days.  The roads were washed out, so they couldn’t get the injured to the hospital.  The injured and the dead they recovered were all brought to the church.  Some of the injured died of their injuries or the cold before aid could get to them.

Vision joined the teams who went out to find survivors, and it was he who found one of his best friends’ body washed further down the mountain.

“Those days really affected me,” Vision recalls.  “On the left, I had neighbours, and on the right.  Now there is nothing left.  I don’t feel good.”

Eventually, larger helicopters arrived to evacuate the injured and bring food and other supplies.  He and his father received mielie meal (maize meal), beans, beef, oil, salt and other foodstuffs to help them get through.  But the trauma of the experience was too much for Vision.  “My dad and I moved to another village,” he said. “It’s no longer a good place to live.  Every time I’m in Ngangu, I remember what happened here.” 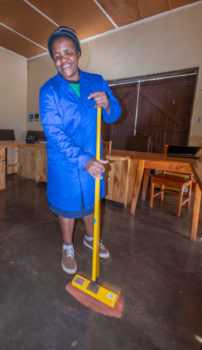 Mary Chanaiwa (46) and her husband live in Ngangu village in Zimbabwe with their three children, a nephew, and their grandchild. Mary works as an office cleaner for Tsuro Trust, a local partner of ACT member Lutheran Development Services, and volunteers as a village health worker. Photo: Simon Chambers/ACT

Mary Chanaiwa works as a cleaner at the Tsuro Trust, a local partner of ACT member Lutheran Development Services Zimbabwe.  She, too, has lived in Ngangu all of her 46 years.  She lives with her husband, three children, nephew and grandchild.  She described how the storm woke her in the night.  There was no power, but as she walked into the living room she could feel water on her feet.  “I woke my daughter, and we saw water flowing in through the kitchen door and through the house,” she said.

They lost most of their possessions in the flooding, and have had to stay with friends and relatives as they clean what they can of their house.

Mary is a village health worker, working with pregnant women and young children to ensure that they are healthy and cared for.  She put her training to use in helping to treat the injured after the cyclone.

Mary and her family also received food and clothing to help them recover.  She considers her family lucky- no one died, and they did not lose their house, although the land that their field was on was damaged and they lost their crops.

Mary’s dream is to be able to afford a house somewhere else, so her family can be safe, and she can continue to work with Tsuro Trust.

Lutheran Development Service (LDS) and other ACT members are responding to the humanitarian need in Ngangu and other communities in Zimbabwe that were affected by the landslides and flooding of Cyclone Idai with food, shelter, water and sanitation, psychosocial support, and livelihood recovery work.