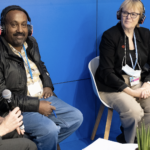 Dawit Beza of Norwegian Church Aid is the Coordinator of ACT Ethiopia. Bikila Abeya is the Programs Director at EECMY-DAASSC. Both participated in the second week of the annual global climate negotiations, held in Glasgow, Scotland, November 7 to 13, where Bikila was part of a panel on locally led adaptation organised by DanChurchAid.

“It was a very good opportunity,” says Dawit, pointing to events on locally led adaptation, pavilions on appropriate technology and the opportunity to network.  “It was a good opportunity to learn from other churches in other parts of the world,” says Bikila. “If we go for the same goal, we have a chance to make change, I learned.”

Advocacy is an important part of ACT’s Climate Justice program. Building on his prior relationship with Ethiopia’s climate negotiators, Dawit discussed advocacy with them. “Our government has a very clear strategy on climate resilient green economies. But when it comes to practical applications … they are not environmentally friendly,” he says. Noting that foreign investment is very important for developing countries, he says “they should also look into the environmental friendliness of that investment.” Bikila and Dawit also participated in ACT’s COP26 climate actions and the Climate March, which “put pressure on the negotiators,” says Bikila.

“I got the chance to learn how to advocate at all levels – at local, regional and national levels,” says Bikila. Ethiopia has only recently allowed advocacy. “When we’re able to advocate, the government, who will be negotiators at … next year’s COP, get the opportunity [to hear] what the people, civil society, are thinking.”

Faith communities have a special role to play. “Here in Ethiopia almost all people are part of a faith community, whether church or mosque,” says Bikila. “We can bring change and influence the government at all levels. The impact of faith communities is very big… and we need to make it stronger.”

Bikila and Dawit describe how a changing climate has “tripled” the daily work of women and girls in collecting firewood and water. “As the rain pattern changes, the moisture in the soil decreases,” says Bikila, and productivity decreases. “Women are the ones who are responsible to feed their family,” he says. Yet women and girls are also the last in the family to get an education, with few options for alternative livelihoods. “Climate change and gender justice are really inseparable,” says Bikila.

Both delegates would like to see more focus on locally led adaptation at future climate conferences. “We need to focus on local knowledge; the traditional knowledge the community has,” says Bikila. “It brings lasting impact.”

That climate change is now an issue “the whole world” is dealing with is “inspiring,” says Dawit. “The developed nations have started to see the impact,” says Bikila. “They have the capacity to absorb the shock. But here in developing countries we are suffering … and our people are losing almost all their livelihoods. But now it’s become the concern of all.”

“There are initiatives where both the North and South are coming together with a common goal,” says Dawit. “That is very encouraging.”