Leave no one behind- with a gender focus 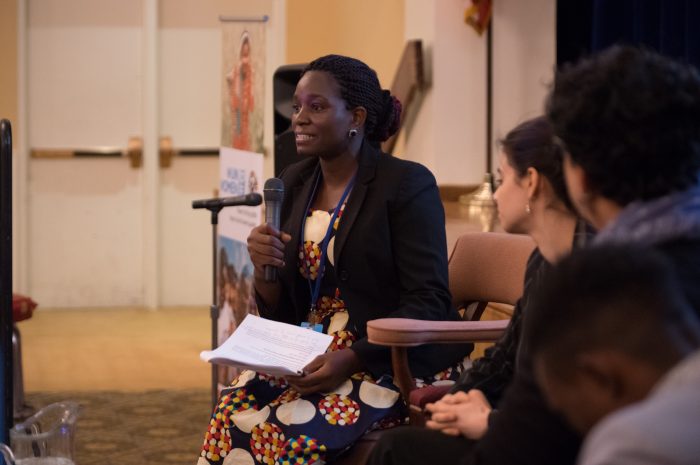 “A young, rural girl will most likely be caring for her siblings by the time she is four or five,” said Lopa Banerjee of UN Women. “She will be helping to get firewood and water.  She will end up in an early marriage, have children while she is young, with complications to the births.  She will have no choice over the number of children she has.  She will likely experience violence.  She will not have the option to find decent work.”

“These problems are magnified if she is a refugee, disabled, Indigenous, a widow, or of a different sexual or gender orientation.”

This presentation kicked off a lively event attended by over 300 people which examined the slogan of the Sustainable Development Goals to “Leave No One Behind” through a gender lens.  ACT Alliance was one of the hosts of the event, which was led by UN Women.  Leaving No One Behind for Planet 50/50 by 2030: every rural woman and girl everywhere shared the voices of women and girls, as well as LGBTQI people as they discussed their experience of being left behind due to disability, age, location, marital status, gender expression, or more.

Gladys Nairuba, from ACT member DanChurchAid’s Uganda office, spoke during the event about the role of faith-based organisations in gender justice.  “ACT Alliance across the world is working for the rights of women…  It is injustice that is keeping women behind.  Faith actors can’t be quiet.  As ACT Alliance, all the members are boldly speaking out against injustice.”

“Faith leaders are saying we should not put out our voice because it is convenient,” she continued. “We should speak irrespective of who is affected. We do not have a choice.  We have to speak out.  Injustice in any place is injustice everywhere.”

In many countries around the world, religions have significant power.  In Uganda, 95% of the population is affiliated with religion.  Faith groups have a powerful role as conveners in their context, bringing people together to talk about issues related to gender.  “We are talking about change.  We are talking about valuing women.  That is where it starts from.  People are in churches and mosques.  If we put messages out where people are, then we will not miss the mark,” Nairuba concluded.

After hearing from a wide variety of voices from around the world, participants discussed what policy standards could be created to ensure that the SDG achievement “Leave no one behind” can be realized for women and girls around the world, especially those living in rural contexts.  Ideas ranged from the collection of disaggregated data to ensuring the participation of rural women in government and other structures to the importance of male involvement, accountability and responsibility in gender justice.  These ideas will be shared by UN Women for more input after CSW.

Dr. Phumzile Mlambo-Ngcuka, Executive Director of UN Women said, “The impact of gender discrimination starts from when someone is conceived and they are a girl…  You are asking for our policy to be gender aware and to address all of these intersecting life stages that women and girls go through.”  She spoke of gender-based violence, economic disadvantage facing women, early marriage, and more challenges facing women and girls, and the need to address these challenges.

Gladys Nairuba reflected after the event that “The Leave No One Behind event and active participation of faith actors is in a way reaffirming the critical role of faith in addressing gender targeted injustice. And the platform provided for faith actors to share what we do, own up and challenge ourselves to fast track the change. What I kept hearing is the social constructs and how they perpetuate gender violations. And some of these are built by culture and faith which are as diverse as the participants that were in the room.

“On the other side it’s knowing that the event was demonstrating that not even the faith actors should be left behind.”