Migration is an issue of concern to every country, every person 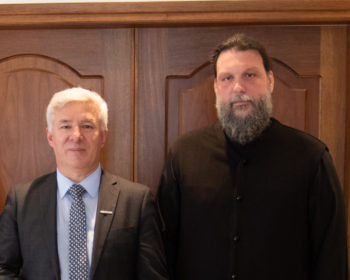 While in Athens, ACT’s General Secretary, Rudelmar Bueno de Faria, met with His Beatitude, Archbishop Ieronymos II, and with His Emminence, Metropolitan Gabriel of the Greek Orthodox Church.  The conversation with both leaders involved the issue of migration.

“The situation of migrants and refugees in Greece is indicative of the complexity of migration issues globally, and the need for better policies and support of those living in tents in ‘hot spots’—sites created to quickly process migrants seeking entry into Greece, is crystal clear,” said de Faria.

Metropolitan Gabriel spoke of the vital role the issue of migration plays for the church in Greece.  “We must act now on this issue.  We have engaged in humanitarian response for years, and we will continue to do so.  But it is the time for advocacy now.  This is a global issue of concern to every country, every person.” 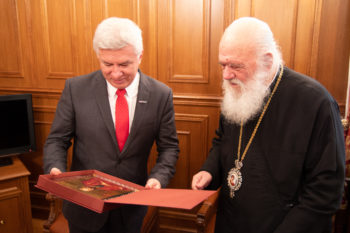 ACT members have responded to the needs of migrants since 2015 through members of the ACT Europe Forum, and through Apostoli, the Archdiocese’s agency for Mission.

The ACT Secretariat devoted a session to discussing the migration situation in Greece, as well as another talking about global issues related to migration and displacement.

“I’m very proud of the work of the Church of Greece in responding to the migration and refugee crisis.  ACT is ready to stand alongside the Church in its call to act now,” concluded de Faria.