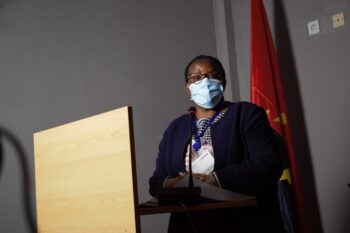 Angola is experiencing the worst drought in 40 years resulting in poor harvests and rising food prices have resulted in an acute food insecurity in Angola’s southern region provinces of Namibe, Huila, Cunene and Cuando Cubango provinces. As food stocks are depleting, the situation has deteriorated and will likely worsen during the next lean season when traditionally food stocks run low. Humanitarian assistance is until the next harvest is needed to prevent further deterioration. Since January 2021, an estimated 3.81 million people have been reported to have insufficient food consumption in the six southern provinces of the country, namely Cunene, Huíla, Namibe, Huambo, Benguela and Cuanza Sul. Angola’s main IDP camp in Kaluheke, Cunene province received more than 7,800 people after months of hunger and water shortage in their respective areas. Another estimate of 16,000 people those that were repatriated from the Republic of Namibia.

“We are in the middle of hunger crisis. Drought impact and hunger is not a story but something visible to everybody” says the Provincial Vice Governor during the southern region conference opening speech in Lubango, Huila province southern Angola. This is the third regional conference after two others which were conducted in the south and at national level in Luanda  in March  and October 2021 respectively. All these conferences have been conducted by the Angolan civil society organizations (Plataforma Sul) a network/coalition composed of several CSOs supported by LWF Angola.

The Lutheran World Federation, (LWF), Norwegian Church Aid (NCA) and the Council of Christian Churches in Angola (Conselho de Igrejas Cristã em Angola – CICA) are members of the ACT Angola Forum. The two organizations (LWF and NCA) have well established programmes in Angola and share a vision of fighting poverty and exclusion by working with local  churches and rights-based approaches and to promote a life with dignity for all.