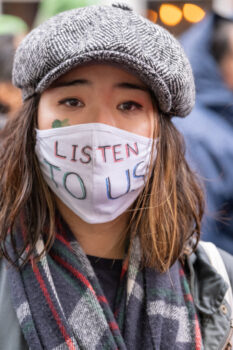 On January 25, ACT Alliance joined with other faith-based organisations and UN agencies to host the 8th Annual Symposium on the Role of Religion and Faith-based Organizations in International Affairs, under the theme “Mobilizing Moral Influence and Governance to End the Systemic Injustice of Racism, the legacy of Colonialism and Slavery.”

Speakers at the event which is available to watch here, highlighted the challenges of colonialism and racism, the role of faith actors both in perpetuating and in addressing these issues, and presented some concrete ways of addressing the issues.

H.E. Alice Wairimu Nderitu, special adviser of the UN secretary-general on the Prevention of Genocide said, “I have heard opinions that racism and racial discrimination belong to the past. But they are very real and very present in our society.”

“Dehumanization of individuals based on the colour of their skin, their religion, ethnicity, nationality, gender, or any other form of identity, takes away the humanity that justifies the universal protection of their rights,” continued Nderitu.

The topic of the Symposium is an important one for ACT Alliance, said Rudelmar Bueno de Faria, ACT’s General Secretary, in his remarks during the event. “It is extremely important and urgent to address racism in international humanitarian and development work.  In our recent General Assembly, racism and decolonization were extensively discussed by members and actions were proposed to address them in meaningful and practical ways.

“The aid sector has long been criticised for being deeply imbued by its colonial past and structural racism,” Bueno de Faria continued.  “This has enabled the ideology and practice of the powerful to be normalised in ways that systematically undervalued local knowledge and expertise. We know that it is still difficult to openly state that the international development sector is racist and talking about race is still taboo. However, continuing to ignore the ubiquity of race and racism in the sector is not a choice we have.”

Bueno de Faria discussed the issues in the context of the COVID-19 pandemic: “While discrimination and inequalities exist in different forms and across societies, the COVID-19 pandemic has brought to the fore the systemic, structural and widespread nature of racial injustice, racial violence and racial inequality from which people of colour disproportionately suffer.”

He offered a number of concrete steps that faith groups and other actors in the sector can take to begin to address racism and colonialization: “there are many ways to overcome the existing barriers to end racism, including issues such as valuing local knowledge and approaches, listening to and including indigenous and local leaders and putting them in the driving seat, as well as collective responsibility to work for justice/reparations and to call out continuing racism and colonial legacies whenever and wherever we find them, particularly to ensure gender sensitive approaches given that women of color are most affected.”

ACT Alliance is committed to concretely addressing the issue of colonization and is continuing to explore the ideas and issues raised on the topic during its General Assembly in 2021.  As Bueno de Faria said in conclusion, “We need to decolonize our mindsets – a power shift is indeed possible.”