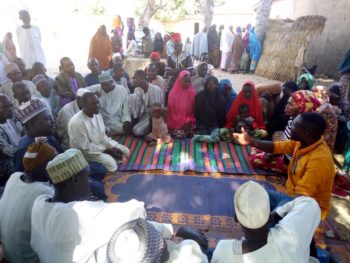 “The government helped save many girls  abducted by Boko Haram, but it doesn’t protect them from physical abuses by government armed forces. In one village I have visited eight girls below 17 who said they had been raped by government soldiers”,  says Nubwa, who works in a local organisation that cooperates with NCA on GBV.

Borno State in North East Nigeria has experienced nine years of Armed Organized Group (AOG) insurgency and counter military operations. As of October 2018, approximately 2.3 million of internally displaced people have been registered, around 300 000 of them live in over-congested camps.

The displacement and continued movement of IDPs creates major protection concerns, causing arbitrary detentions, family separations and increased gender-based violence. The situation caught international headlines when in April 2014 Boko Haram attacked a boarding school in the town named Chibok in North East Nigeria. 276 young were taken away, most of them Christians.

Reports on sexual abuse and exploitation reflect an increase of rapes of women and girls by Nigerian security forces and Armed Organized Groups. According to a UNFPA report, six out of ten women have experienced one or more forms of GBV. Traditional cultural beliefs and practices further exacerbate  protection and GBV issues.

There is a pressing necessity to continue providing assistance to prevent and mitigate gender-based violence towards women and girls, and to provide specialised GBV response services to those affected. 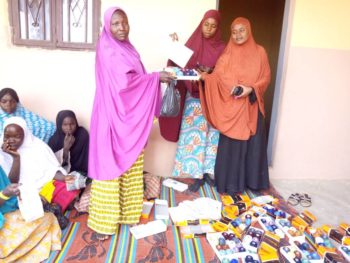 NCA has actively responded to GBV in Borno, North East Nigeria, since early 2017.

Women and Girls Safe Spaces (WGSS) are at the core of NCA’s GBV prevention and response services.  So far NCA has established 7 WGSSs in the country. These are entry points for psychosocial support,  livelihood skills teaching and livelihood support, distribution of hygiene kits, including kits for menstrual hygiene.  Survivors are referred to health clinics where available, and health personnel are trained on Clinical Management of Rape.

About the girls who were abducted by Boko Haram, Nubwa says: “The girls that have been released returned to empty houses. Men in the community will not marry them, as many girls in reality were sex slaves, being forced to sell their body to survive in exchange for food and protection.”

Nubwa works for an organisation which belongs to the same church as the Chibok girls.  She is responsible for the GBV program in cooperation with NCA. Fighting stigma and awareness raising on GBV targeting both men and women is part of the work Nubwa carries out.

Nubwa says that child marriage has become more common than before. Many parents wants their young daughters to be married, in the hope that they will be less exposed to kidnapping by Boko Haram.

“It’s about survival”, Nubwa says. “It is quite common that 15 years old girls are married to  50 years old men . The man who offers most dowry is easily accepted by the parents of the girl.”

Notwithstanding the GBV crisis in North East Nigeria, Nubwa  believes there is hope – and that girls who have experienced severe GBV can be re-integrated. “More women than before now dare to raise their voice, both about abuse and the lack of rights”, she says.  Nubwa also told us how important is for those working on GBV and women’s and girls’ rights having continued international support and attention.