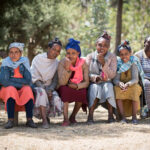 justice in Ethiopia. Ethiopia: Nuances of the UNFCCC Gender Action Plan explores how the Gender Action Plan (GAP) is being implemented by various levels of government, NGOs, ACT members, and INGOs throughout the country. The study was funded by Act Sweden and Brot fur die Welt and written by PATH Consulting of Addis Ababa, Ethiopia. A short document of Policy recommendations drawn from the study and intended for local government actors is also available.

The 48-page study and the policy recommendations were presented to AEF members, CSOs and government representatives at a special meeting on March 31. “Those present were enthusiastic about building a common framework on the gender and climate change nexus,” said Julius Mbatia, ACT Alliance Climate Justice manager. “ACT Alliance hopes this report will catalyse responsive policy and programming in gender and climate change mainstreaming.” Government representatives appreciated the study and welcomed the policy recommendations.

The study notes that Ethiopia is fertile ground for the implementation of gender justice initiatives, given the country’s signing of related UN agreements, its constitutional commitments and its programmes for women. Yet there has so far been limited uptake and understanding of the UNFCCC GAP at various government levels and within NGOs, including among ACT Forum members. “The understanding of gender mainstreaming in climate programmes is interpreted as adding a ‘women’s component’ to an activity,” the study notes. “This alone does not bring the long-lasting changes that gender and climate justice seek to achieve.”  One of the key challenges identified is a lack of technical knowledge to implement gender-responsive climate change adaptation and mitigation.

In Ethiopia, women and girls in all their diversity are disproportionately affected by the climate crisis. Fetching water, collecting fuel, and feeding the family are “100 percent the responsibility of women and girls,” said AEF coordinator Dawit Beza of Norwegian Church Aid in an ACT video interview. “The effects of climate change on women and girls are triple in the rural communities.” The decline in agricultural yields due to climate change impacts leads to further discrimination. “When household income drops, females are the first to be pulled from school,” said Bikila Abeya of AEF member EECMY-DAASSC. “Education is mainly meant for men. Climate change and gender justice are inseparable.”

The study puts forward recommendations for all levels of government, ACT members and Civil Society Organisations (CSOs). They include such practical steps such as translating the UNFCCC Gender Action Plan into local languages; encouraging more collaboration between government, NGOs, ACT, and academic and research institutions; dedicated gender justice and climate justice staffing in Ethiopian NGOs; and increasing the participation of Ethiopian women in international climate conferences. Immediate AEF plans include increasing the awareness of national and international frameworks on gender and climate justice programmes; conducting sector-specific gender analyses; and designing a mainstreaming strategy.

The report is just a beginning. AEF members are using the policy recommendations to discuss collaboration with government actors. The ACT members that sponsored the study are optimistic. “I hope it inspires collaboration on programming to strengthen gender-inclusive climate justice and helps the UNFCCC’s Gender Action Plan move from global words to national action,” said Margareta Koltai, Act Church of Sweden’s Climate Justice Policy Adviser. “I look forward to hearing how this mapping will inspire joint actions for equality and climate.”