As ACT Alliance members around the world continue to respond to extreme weather events, it is increasingly clear that climate change threatens to wipe out significant gains that countries have made towards sustainable development and poverty alleviation.

While many communities have tried to adapt to climate change, the reality is that sometimes adaptation efforts are not enough to prevent communities from severe climate impacts, and there will be situations where losses and damages will occur. 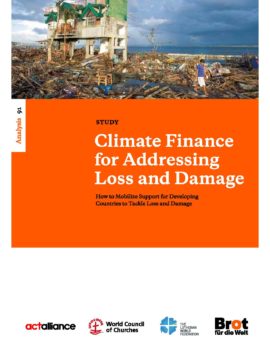 In a recent report titled Climate Finance for Addressing Loss and Damage: How to Mobilize Support for Developing Countries to Tackle Loss and Damage ACT Alliance, Bread for the World, the World Council of Churches and the Lutheran World Federation acknowledge the injustices posed by climate change on the climate-vulnerable.

The report notes that existing financial support mechanisms and climate actions are not enough to prevent loss and damage and examines various criteria that could be applied to develop an architecture to finance loss and damage in an ethical, just, and effective way.

“Poor and vulnerable countries should not have to pay for the climate-induced loss and damages that they face. Loss and damage finance must be put at the top of the agenda of the climate summit in Madrid,” says Mattias Söderberg, co-chair of ACT Alliance’s Climate Change Working Group.

“It’s incumbent on developed countries to play their part in radically confronting the climate crisis and to make support available to the most vulnerable people. Failing to do so, will demonstrate a lack of solidarity with front-line communities and the life-threatening realities that they face as climate change intensifies,” says Toroitich.

As ACT Alliance prepares for COP25, issues around loss and damage remain a key priority. ACT has joined nearly 100 civil society organizations to endorse the 2019 CSO Equity Review Report Can Climate Change-Fuelled Loss and Damage Ever Be Fair? The report highlights the inequalities faced by developing countries as a result of climate change and identifies the responsibility that wealthy countries must take for its devastating impacts. 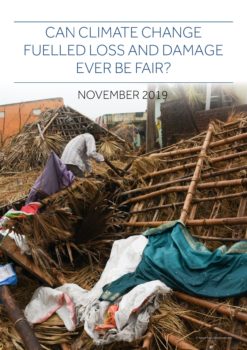 “The people who have contributed the least to climate change in terms of emissions, are facing severe losses and damages, while developed countries who have a disproportionate historical responsibility for contributing to global warming, are hesitating to scale up their climate ambition. This is unfair,” says Söderberg.

The report provides evidence-based contributions on why tackling loss and damage in an equitable manner is a ‘must issue’ and notes that the level of effort needed by all countries to adequately tackle climate change is inconsistent with what is being delivered by developed countries.

“Although equity is at the core of the climate debate, it is not evident in the international community’s response to tackling loss and damage. It is unfair that vulnerable communities who have limited responsibility for contributing to global warming, are finding themselves even further in debt because they have to rebuild their homes after climate-related disasters,” concluded Söderberg.

World leaders must not fail to deliver on climate finance for loss and damage. If adequate resources are not mobilized, the worsening climate and debt crises will make it extremely difficult for developing countries to meet the Sustainable Development Goals.