North American churches mobilize to protect people on the move 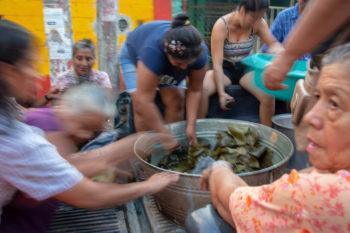 A parish group in Pijijiapan, Mexico put their money together to make 1,000 tamales to give to people on the migrant caravan. Churches of all denominations have worked together to provide food and water and accommodation to the migrants along the route. Photo: Sean Hawkey/ACT

During its annual meeting in Milwaukee the Evangelical Lutheran Church in America (ELCA), a member of ACT Alliance, voted to become the first sanctuary church in North America.

With this ground-breaking decision, ELCA pledged to provide shelter to undocumented immigrants and protect them from unnecessary jailing and deportation.

Although churches all over the United States stepped up on several occasions to help immigrants targeted by President Trump’s immigration policies, this is the first time that a church has declared itself a sanctuary, openly challenging the Trump government.

In an interview with CNN, Christopher Vergara, who works on immigration issues in the ELCA’s Metro New York Synod, said “Christians have offered sanctuary for 2,000 years, continuing an ancient biblical practice in which cities and houses of worship provided refuge and asylum for people fleeing injustice”.

The Canadian members of ACT Alliance show the same concerns for policies that target the most vulnerable who are fleeing violence and persecution. In a letter sent to President Trump, they expressed solidarity for their sister churches in the United States that are confronting the crisis and pointed out that “Canada and the United States share a long tradition of welcoming men, women and children who are seeking refuge from persecution and conflict. [ …]  Refugee resettlement plays a critical role both in ensuring safety for people fleeing persecution and in advancing religious and political freedom.”

We are facing the worse migration crisis since WWII. War, conflict, persecution and climate change are forcing millions to flee. There are more than 70 million displaced persons worldwide, including more than 25 million refugees, over half of whom are children. While working for the peaceful resolutions of these crisis, we have a moral responsibility to act today and protect those who seek refuge and safety for their families.

The ACT North America Forum has joined with the Central American Forum in creating a regional appeal to support work being done by ACT members through Central America, Mexico, Canada, and the USA.  The purpose of this appeal is to provide a humanitarian component to help meet the needs of people on the move, to promote legislation and policies that are in accordance with states’ human rights obligations and to solicit the support from international community through the pertinent bodies of the United Nations.

ACT members seek to guarantee the safety and physical integrity of migrants, especially minors, the elderly and women, and to prevent people from being deceived by international criminal organisations engaged in migrant smuggling. Collecting information about rights violations, and providing evidence of CSO activities is crucial for influencing a rights-based implementation of the Global Compacts for Migration and on Refugees in Central America and Mexico.