One year after Hurricane Matthew, Haitians rebuild their communities 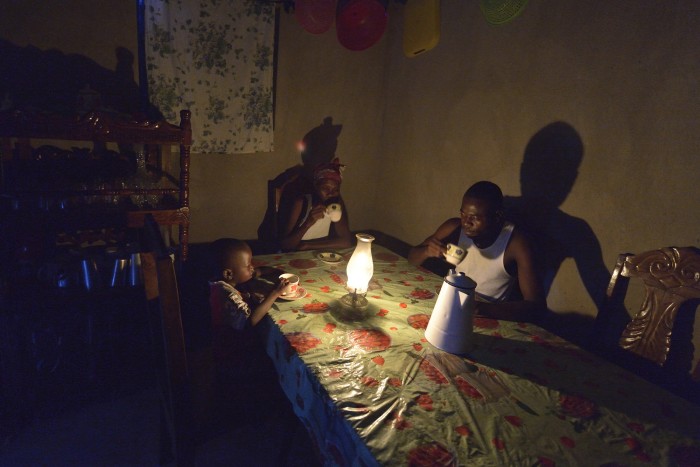 Eliciore Volbrun (center) and her sons Youri (left) and Wilson drink tea before dawn in their family’s new home in Djondgon, a village near Jean-Rabel in northwestern Haiti. The family’s previous house was destroyed during Hurricane Matthew in 2016, and Church World Service, a member of the ACT Alliance, helped the family build their sturdy new home. Photo: Paul Jeffrey

Port-au-Prince, October 4, 2017 – When Hurricane Matthew slammed into Haiti one year ago today, it destroyed crops and houses and killed as many as 1600 people throughout the Caribbean island nation. Yet for survivors in communities where the ACT Alliance partners with local groups to support reconstruction, the anguish of the storm is slowing giving way to a more resilient future.

“I feel safe at home now,” said Christiana Herard, a 69-year old woman in Djondgon, a village near Jean-Rabel in northwestern Haiti. “When the hurricane hit here last year our mud walls just shook and then finally crumbled. We fled to the church, and we ended up living there for three months. Then we moved into a temporary shelter under a tarp, but at the end of April we moved into our new house. It has cement walls, so if another storm comes I’m not scared of what will happen.”

Herard’s home was built with support from Church World Service, one of several members of the ACT Alliance that works in Haiti. For years CWS has supported local efforts in the drought-plagued Northwest to help farmers improve soil fertility and crop yields while producing a healthier variety of foods. It’s a long term commitment in a region where poverty and environmental degradation have left communities extremely vulnerable to disasters.

Supporting community-based solutions is slow work, says Margot DeGreef, the country representative for CWS, but it yields better results in the long run. “Some NGOs come here after a storm and hand out roofing to thousands of families, and then claim they have helped a huge number of people,” she said. “We’re building 81 houses in the Northwest, but they are sturdy and resilient houses. The families that live in them won’t have any problems during the next hurricane.”

When Hurricane Matthew hit, life in Ganthier still wasn’t back to normal after being ravaged by the 2010 earthquake. Servicio Social de las Iglesias Dominicanas, another ACT Alliance member, has worked in several poor villages in the area since coming to Haiti from the neighboring Dominican Republic in the days after the quake. It is building over 350 houses for Matthew survivors, but a lot of its effort is devoted to disaster risk reduction–helping poor residents lower their vulnerability to the frequent natural hazards that torment the area.

SSID has trained 25 youth as first responders, equipping them with jackets, boots, tools, ropes, megaphones, shovels, lamps–everything they might need in a crisis. The group’s main focus is on prevention, including spreading the alarm that people need to evacuate from high-risk areas. During Hurricane Matthew they put their newly acquired skills to the test, pulling people from flooded houses and overflowing rivers.

Members of the ACT Haiti Forum including CWS and SSID continue to be present in Ganthier, Djondgon and many other communities, working with residents to rebuild, become more resilient, and improve their lives.