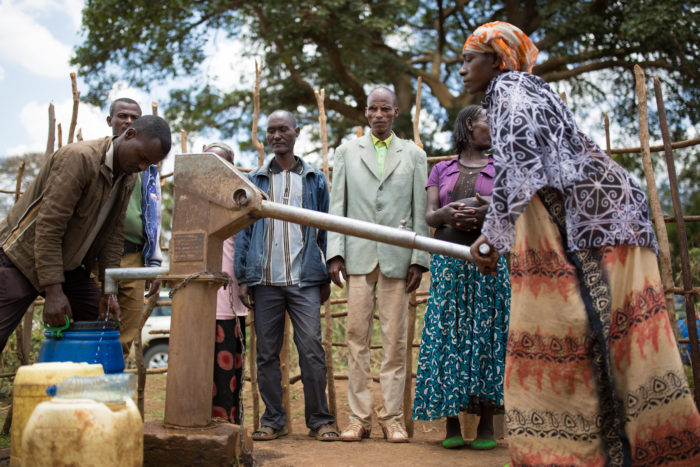 This opinion piece was originally published by the Thomson Reuters Foundation and is available here.

Communities on the frontlines of global warming impacts rarely have a say in decisions made to protect them. This must change.

Birgitte Qvist-Sørensen is moderator of the ACT Alliance and general secretary of DanChurchAid; Reverend Ssekasiko Wilberforce is a local faith leader in Uganda, and Wanjira Mathai is vice president and regional director for Africa at the World Resources Institute.

The past year brought unprecedented suffering from COVID-19. On top of the pandemic, climate change continued to batter already vulnerable communities, disproportionately hurting those with the least resources to respond.

Yet despite these impacts, those same communities on the frontlines rarely have a say in the decisions made to protect themselves from climate impacts. This must change.

We must shift power and resources to local actors so they can choose the solutions that work for their communities. Doing so is vital to creating a more equitable, resilient society.

The choice is clear: Governments and donors can return to business as usual, providing funding with short time-horizons and arduous, top-down processes to access it. Or they can shift to a world where local actors, including poor and marginalized populations, have the power to shape their own future.

By ensuring local actors have agency in building resilience to climate impacts, we can ensure these decisions are grounded in local knowledge and experiences. Combined with scientific information, this can lead to more effective and sustained resilience — and, in turn, more lives saved, less hunger, and more opportunities.

In Kanoni village, in Uganda’s Gomba District, for example, climate change drives frequent droughts that dwindle the water supply, leading to food shortages and low pasture for the animals.

To proactively address this problem, which is a daily hindrance, the people of the Kanoni village started planting indigenous trees to retain water, improve the soil, and create shadows to prevent the soil from baking in the sun.

Locally led adaptation efforts must be intentional about integrating gender-based, economic, and political inequalities that are root causes of vulnerability.

In the face of severe drought, a group of women farmers in India’s Maharashtra state bucked the trend of growing only a few cash crops, which kept failing in their water-scarce region.

Working with a local grassroots women-led organization, they grew a diverse mix of water-efficient crops that farmers can both sell and feed their families with. This agricultural transformation has boosted yields, improved livelihoods and has since been expanded to hundreds of other farms in the region.

Ensuring local actors have agency is both the right and smart thing to do. Yet, to scale up and develop climate adaptation solutions, local communities still need more support and easier access to funding.

While not all adaptation needs to be locally owned or led, governments, development banks and donors must commit to putting more resources into local hands for local adaptation priorities. Communities need accessible funding that supports long-term development of local governance processes, capacity, and institutions to build resilience, without expecting them to shoulder the burden of adaptation.

In Kenya, climate change and intensified land-use changes have caused Lake Baringo to rise by over 46 inches (116 cm) since May, affecting jobs, education and health services.

To support the local communities that rely on this lake, the United Kingdom launched the Community Resilience in the Kerio River Ecosystem (CORKE) program, which helps shift agency to community members who can identify hazards and vulnerabilities when developing climate change actions and priorities.

Local communities — whether they are farmers in Uganda, grassroots women in India or villages dependant on Lake Baringo in Kenya — need capacity and resources to help make and implement decisions that affect them.

This week, the online Climate Adaptation Summit, hosted by the Netherlands, will bring together heads of state and other global leaders to raise global ambition on creating a climate-resilient future, focusing on vulnerable communities. At the summit, dozens of organizations will come together to highlight their commitments to empower local actors to adapt.

A growing movement of countries, international institutions and local groups recognize the need to put more resources into local hands for climate adaptation. But make no mistake: It will take hard work and serious changes in current practices to enact this shift.

As governments and international institutions look to recover from COVID-19, they have a chance to write a new social contract — one in which people at the local level have power and resources to make decisions that affect them. It’s time to chart a more equitable, resilient path, led by communities on the frontlines.