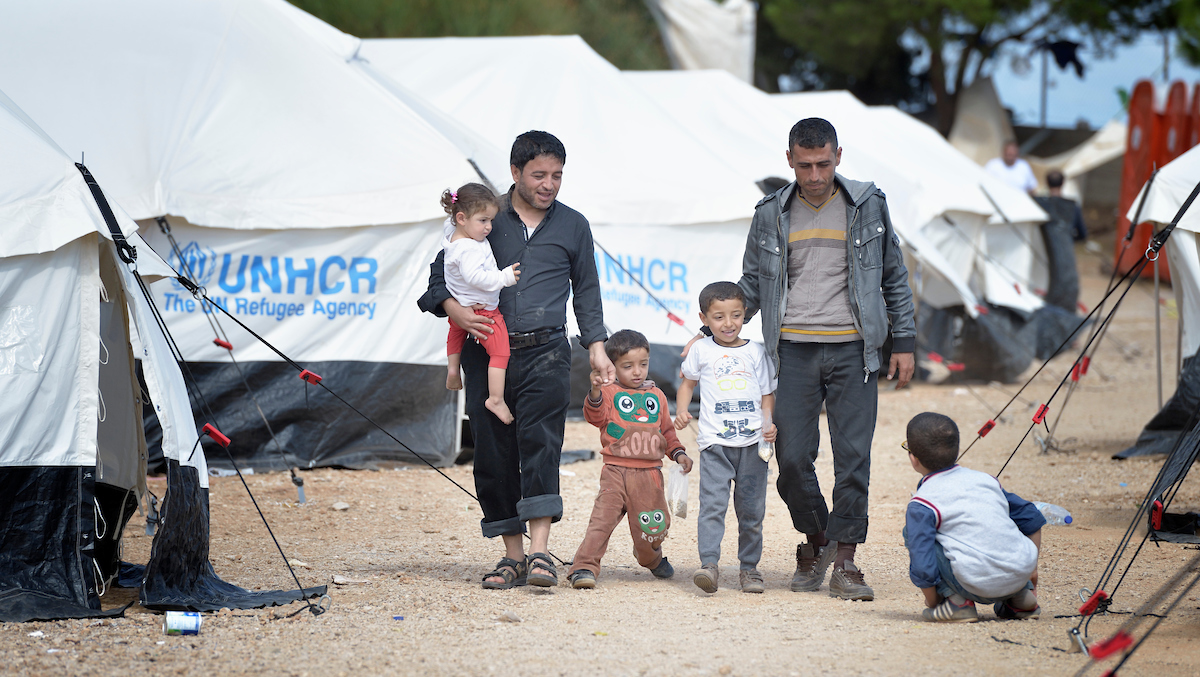 Syrians walk through a camp for refugees who have arrived on the Greek island of Chios after crossing the Aegean Sea in small boats from Turkey. They are registered and provided with food and shelter in a reception center built with support from International Orthodox Christian Charities, a member of the ACT Alliance. Hundreds of thousands of refugees and migrants have passed through Greece in 2015 on their way to western Europe. Photo: Paul Jeffrey/ACT

Christian organizations representing 2.8 billion people—about one-third of the world’s population—have released a statement on the dire situation of migrants and refugees in Europe, and they are demanding a more compassionate approach.

“Solidarity should be the guiding principle governing migration and particularly refugee reception,” the statement says. “We expect the EU to reject the discourse and politics of fear and deterrence, and to adopt a principled stance and compassionate practice based on the fundamental values on which the EU is founded.”

The organizations issued the statement in advance of the EU Commission’s presentation of its new Migration Pact on 23 September.

“We have but one precious human family within which we are entrusted with caring for one other,” said World Council of Churches interim general secretary Fr Prof. Dr Ioan Sauca. “Every nation’s asylum policies must reflect this sense of caring and trust as a shared journey, a solemn responsibility and a common witness. We have high expectations of the EU Commission’s presentation of its new pact on migration and asylum on 23 September.”

Rudelmar Bueno de Faria, general secretary of the ACT Alliance, noted that the tragic fire in Moria “was a poignant reminder of the entirely predictable and avoidable consequences of an EU asylum and migration policy that puts the integrity of borders over that of human lives, and favours populism over dignity and humanity. We expect better from Europe and its leaders. It’s time to change course.”

Dr Jørgen Skov Sørensen, general secretary of the Conference of European Churches, stated: “Churches and Christian communities throughout Europe are witnessing the disturbing situation with migrants and refugees in the region, especially following recent developments in the Moria camp. The human consequences of the situation are of deep concern to us.”

“We call upon all our member churches and indeed all people of faith to commit to prayer, taking on our role as messengers of courage and hope. In whatever way possible, we must continue and strengthen our joint efforts in giving hope to the vulnerable in a hopeless situation,” he said.

Dr Torsten Moritz, general secretary of the Churches’ Commission for Migrants in Europe, reflected that, over the last years and, most tragically, two weeks ago with the fire at the Moria camp, we have witnessed the awful consequences of the current EU migration policy. “A policy which tries to keep refugees and migrants at the border, push them back there or return them at any price,” said Moritz. “The new asylum and migration pact can’t be more of the same.”

Moritz added that the EU needs an honest and courageous new start, in which it accepts its own responsibility rather than denying it. “That makes it necessary to create safe passages, offer decent reception and a welcoming society and look at how Europe continues to create reasons for displacement,” he said. “Churches continue to stand ready to support the EU and its member states if it really is willing for such a fresh start.”

Rev. Dr Chris Ferguson, general secretary of the World Communion of Reformed Churches, said that the situation of those seeking refuge and asylum in Greece and elsewhere is symptomatic of the deeper roots of colonialism and imperialism that have exploited people and resources for profit. “As people of faith we stand with the migrant, the refugee, those seeking asylum and call for hospitality and welcome,” he said. “We believe that our calling is to work continually for justice for all the oppressed.”

The Evangelical Church of Greece has been actively responding to the refugee situation since its very beginning and continues to support the refugees in multiple ways. They “urge the ecumenical church along with the international community to act decisively in offering relief and reinforcements to Greece, best serving both the needs of the ‘Moria refugees’ as well as those of the indigenous people of Lesvos, by accepting and accommodating many of the refugees who have already been granted asylum in their countries,” said Rev. Dimitris Boukis, secretary of the Executive Committee of the General Synod of the Evangelical Church of Greece.

Martina Wasserloos, president of the World Communion of Reformed Churches in Europe, expressed her happiness about this common initiative to urge European authorities to take, at last, responsibility for human dignity and life.

“As the World Communion of Reformed Churches in Europe, we are facing the hardship of migrants,” she said. “We are convinced and confess in the face of refugees, we see the image of God. As churches, we offer help to overcome this crisis in manifold ways, but we expect as well benevolent and humanitarian solutions from those who have to take political decisions.”

Within the Anglican Communion, people are called in the Five Marks of Mission to “respond to human need by loving service…transform unjust structures of society, to challenge violence of every kind and pursue peace and reconciliation,” noted Most Rev. Dr Josiah Idowu-Fearon, secretary-general of the Anglican Communion. “Across our world, millions of women, men, and children need to feel this faith in action within their lives, as they flee conflict and violence, and seek to escape from the devastating effects of poverty and climate,” he said. “This demands a more intentional collective response in which the churches and other faith communities—including the Anglican Communion—are ready to take their place.”

The World Methodist Council has identified radical hospitality and advocacy on behalf of “the stranger” as a central theme for the years 2016-2021, reflected Bishop Ivan Abrahams, general secretary of the council. “We continue to work together with everyone, everywhere in accompanying migrants, refugees, and asylum seekers sharing their tears, hopes, and dreams for sustainable life and livelihood,” he said.

For Rev. Dr Martin Junge, general secretary of the Lutheran World Federation, this is an opportunity for European countries to grow in mutual solidarity. “They can lead by example in welcoming and protecting the stranger by upholding international obligations.”

He said that “one of the first tasks of the LWF, like the European Union, was to respond to the needs of European refugees after the Second World War. Our member churches worldwide stood in solidarity with the millions that were displaced in Europe. Multilateralism, compassion, and service are at the heart of LWF’s humanitarian work with displaced people worldwide. We must not forget that refugees lose many things when they flee, but never their human rights.”

The Pontifical Council for Promoting Christian Unity shared reflections on a message from Pope Francis. “In his message for the World Day of Migrants and Refugees to be observed in the Catholic Church next Sunday 27 September 2020, Pope Francis states: ‘Situations of conflict and humanitarian emergencies, aggravated by climate change, are increasing the numbers of displaced persons and affecting people already living in a state of dire poverty. Many of the countries experiencing these situations lack adequate structures for meeting the needs of the displaced.’ He urges public authorities, churches, and all of us to welcome, protect, promote and integrate displaced persons. As Christians, we urge the European Union country members to develop and implement equitable and just solutions respecting human dignity and human rights.”

The European Region of the World Association for Christian Communication also voiced support for the statement, as well, emphasizing the need to counter hate speech against migrants and refugees, especially in social media.

“Our public discourse, particularly in social media and via media agencies, must respect the human dignity of migrants and refugees,” said Dr Stephen Brown, president of the Europe regional association of the World Association for Christian Communication. “At the same time, media professionals need to ensure balanced coverage of migrants and refugees, avoiding stereotypical portrayals and oversimplification.”

The statement is co-signed by the ACT Alliance, the Anglican Communion, the Churches’ Commission for Migrants in Europe, the Conference of European Churches, the European Region of the World Association for Christian Communication, the Evangelical Church of Greece, the Integration Center for Migrant Workers – Ecumenical Refugee Program, Non Profit Organisation of the Church of Greece, the Lutheran World Federation, the Pontifical Council for Promoting Christian Unity , the World Communion of Reformed Churches, the World Communion of Reformed Churches (European Region), the World Council of Churches and the World Methodist Council.

Read the full statement of 22 September 2020

Archbishop of Athens and All Greece: “Welcoming the stranger is an integral part of Christian heritage” (WCC press release of 21 September 2020)