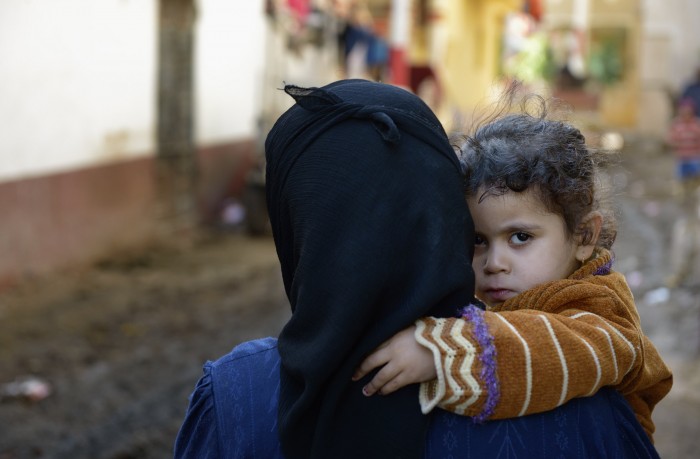 A woman carries her daughter along a muddy street in the Egyptian village of Sakra. Photo: Paul Jeffrey

“As long as women’s and girls’ bodies aren’t safe when walking on the streets then it is difficult to live”. I know this, but when meeting with Mozn Hassan, human rights defender and Director of Nazra for Feminist Studies, and hearing her way of describing the importance of mobilization and education for women’s rights and protection it shook me deeply.

In Egypt, the situation for women and girls is very difficult, and the promised measures from 2015 to protect them, have failed to be implemented. Two of the worst examples are female genital mutilation and child marriage – practices that are overly frequent. Therefore, implementation of laws at national, regional and global levels are crucial to guarantee a life free from violence, exploitation, discrimination and fear, including ending impunity for all forms of gender-based violence (GBV) and strengthening judicial systems’ capacity to handle cases on sexual GBV.

Mozn says that the Arabic Spring changed the soul of the country, gave hope and a sense of freedom to women; how they saw opportunities of changing their own situation. ”But we are now paying a very high price.”

Human rights defenders focusing women’s rights and protection are among those who are the most threatened in the world, together with environmental activists. Mozn Hassan is subjected to restrictions in her freedom of movement, sharing of information and networking in Egypt. It is dangerous to try to assert equality and rights of women, especially when women and girls are subject to ongoing violence, abuse and discrimination.

It is with pride I can say that we as a global faith-based alliance emphasize equal access to an enabling environment for civil society organizations in general and specifically those addressing the issues regarding equal rights and participation of women. Meeting with women like Mozn Hassan, there couldn’t be any other way forward than to continue to work for protection of women who are active as human rights defenders in the area of economic, social and cultural rights.

Practical material and ideological approaches need to be combined. Liberties and freedoms tend to be irrelevant if not rights are realized. Freedom of speech will not be exercised as long as all time and strength are spent on organizing food for today.

As a global faith-based alliance, we call for an end to gender inequality and injustice; gender-based discrimination and violence; to bridge the gender gap and address unequal power relationships for the promotion of human dignity for all.