Push back against the pushback on gender justice 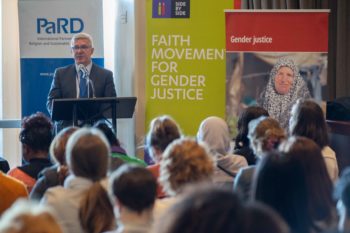 When the 63rd session of the Commission on the Status of Women began two weeks ago, Antonio Guterres, gave an impassioned speech where he called out the resistance to gender justice. “Around the world, there is a pushback on women’s rights.  That pushback is deep, pervasive and relentless.,” he said.  But he continued, calling on participants at CSW to continue to fight for gender justice.  “We will not give ground. We will not turn back. We will push back against the pushback. And we will keep pushing.”

Today, the member states of the United Nations failed to push back very much.  Consistently, there were attempts to roll back language in the text of the final document of CSW63.  In some cases, the chair had to replace whole paragraphs with language from last year, literally rolling things back in time.  In other cases, new paragraphs with new text were simply not accepted.

Elsebeth Gravgaard, from ACT member DanChurchAid, has followed the negotiations at CSW for the last six years.  “I am concerned about the increasingly hard tone at the negotiations, and the difficulty of reaching consensus on advancing gender justice,” she said.  “Still, it is a positive outcome this year- we managed to push back against regression.”

Despite these positives, overall it is a very weak document which does not comprehensively advance the cause of gender justice.  In particular, the theme of this year’s CSW of social protection is not sufficiently addressed.  This is a missed opportunity, as this year was the first time CSW has addressed this vital theme.

“It is the responsibility of states to provide social protections for their citizens,” said ACT’s General Secretary, Rudelmar Bueno de Faria. “We believe that all people are created equal, and enjoy fundamental rights that gender responsive social protection policies need to help ensure.  This CSW failed to substantially advance those rights, leaving women, girls, LGBTI and others at increased risk due to insufficient social protections.  We must do more.  Now is the time to act.”

Of particular concern to ACT Alliance is the paragraph on climate.  Joycia Thorat of CASA India, a member of ACT’s Advisory Group on Advocacy, said “Climate justice should be the backdrop to ensure effective social protection, services and sustainable infrastructure for women and girls. Ensuring women’s leadership and participation in climate matters is critical for gender equality.”

ACT is also concerned about the effect that this weak outcome will have on communities around the world. Gladys Nairuba of the ACT Uganda Forum said, “The increasing push back globally delivers weak commitments and laxity in accountability from states, which further limits the progress on women’s rights. Lack of accountability from states is a matter of life in the communities where we work. We still have a long way to go to get from rhetoric to tangible gender equality.”

“ACT knows that the pushback against gender justice is coming from a minority of conservative governments—often governments that do not represent the feelings of their own citizens,” concluded de Faria. “ACT will continue to actively push back against the pushback, and will leverage its work to ensure justice for all.”