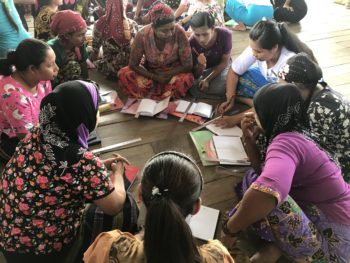 After 60 years of isolation and armed conflict, Myanmar has embarked in a historic process of democratic and economic reform. However, according to UN women, one half of women are still out of the workforce.

The Rakhine state in the west part of Myanmar has a long history of settlements and migration. It is one of the poorest and most populated states in the country. An estimated 140,000 internally displaced people (IDPs) live in camps, making the situation in this region of Myanmar a humanitarian emergency. The majority of the displaced are Muslims who fled their homes due to widespread violence against their villages. Initially, hundreds of thousands of refugees fled to neighboring countries, however increasing travel and movement restrictions have condemned the displaced to camps where they need to rely on assistance from NGOs for their survival.

Due to persistent gender discrimination and inequalities, the situation is even more dire for women and girls.Women in Rakhine State have limited access to livelihood opportunities, making them vulnerable to abuse, exploitation and poverty.

One of the main challenges to market entry in Myanmar is the low level of access to education. This is especially true for women and girls who have to face bias and discrimination. Skills development is crucial for households to earn income and increase women’s level of resilience.

The consortium of partners held a project inception workshop to raise awareness among participants and promote coordination and cooperation with government departments and local communities. The project team visited several IDP camps for focus groups and discussed potential handicraft and weaving products, community and market needs.

“Training women on sewing and weaving skills not only helps them and their families to make a living but it empowers them, it strengthens their confidence and it brings hope and resilience to the entire community,” says a representative from FCA. “Many of the local businesses that employed women saw this as an opportunity to make profit but also to promote the traditional culture of Rakhine”.

Employment-oriented training courses and employment promotion, especially in conflict prone areas, are among the most effective means to drive progress on gender equality and promote poverty eradication. An inclusive approach that welcomes women from different ethnic groups also helps build trust and promote a culture of cooperation and community resilience.

ACT Alliance firmly believes that the lack of access to economic resources, the unequal access to education and employment and the under-representation of women in decision making processes are a consequence of a patriarchal system that is built on exclusion and inequality. Economic empowerment has an impact in all areas of women’s lives and in the sustainable development of their families and communities.

In the spirit of “Leaving no one behind”, in December 2018, ACT Alliance Assembly adopted a new strategic plan, which includes a Gender Justice component committing ACT to actively work to address the systemic causes of poverty and lack of access to resources promoting economic rights of women and girls.