Let’s no forget: locally-led response & Preventing and Mitigating Risks are REQUIRED for a Safer World 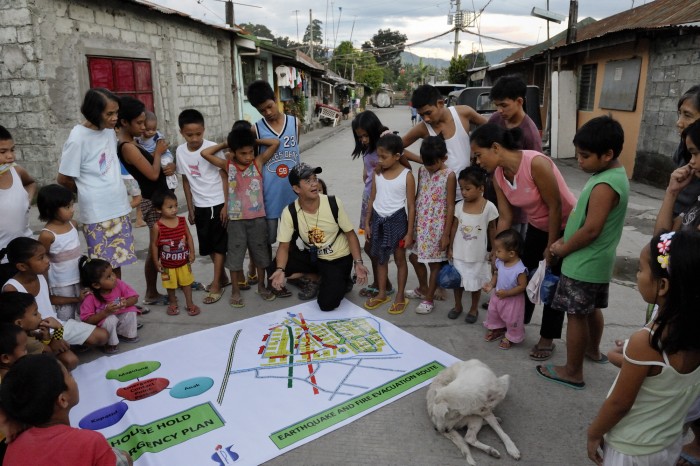 Jun Beltran, the executive secretary of the local homeowners’ association, reviews a disaster risk reduction map with other residents in the Suburban neighborhood of Rodriguez, Rizal, in the Philippines. Most of the community’s families were relocated here from other area of Manila and the nearby countryside to make way for urban renewal projects or to move them out of harm’s way. Yet the new community was hit hard by Typhoon Ketsana in 2009, and Christian Aid, a member of the ACT Alliance, provided emergency relief supplies. Over the years since, with help from Christian Aid and other groups, community members have organized themselves and engaged in a process of disaster risk reduction, including identifying and mapping high-risk zones and evacuation routes in their area. Christian Aid has also assisted with financial and technical support for income generating livelihood projects and community enterprises. Photo: Paul Jeffrey

ACT Alliance has a strong track record on enabling community resilience and Disaster Risk Reduction (DRR). To reduce future risks, here are examples from ACT partners around the world

This is how we reduce future risks:

“A few years ago, I’d nearly given up hope. We’d lost everything in the drought. ACT member EECMY (Mekane Yesus Church) helped us to create the vegetable garden and the shallow well. They gave us seeds and saplings and showed us how to make compost. My wife found work in the tree nursery. And I was able to do a course in masonry. Not so long ago, we nearly starved to death. But now we have a future again!”

2) DRR EDUCATION: Ensuring that DRR education reaches to the most hard-to-reach areas and communities-at-risk

In Pakistan, Act Member CWSA is using a Mobile Knowledge Resource Center equipped in a truck to bring DRR education to remote, hazard-prone communities and help community members, teachers and school children to prepare for the event of a natural disaster.

In Ethiopia, indigenous early warning knowledge and practices are documented, shared and combined with modern technology to strengthen and promote decentralized early warning and response systems by ACT member ICCO. This improves early warnings and increases the trust of communities in the information. Communities are taking action to avoid or reduce disaster risks.

5) INNOVATION: Collaborating with academia and other stakeholders

In Indonesia, we invented a climate field school run by an ACT partner BfW, which demonstrates growing rice on bamboo rafts floating on the water, an innovation developed by the community. The 2 x 5 meter rafts can be made within half an hour, usually from bamboo trunks held together with netting. The cost of 3.80 euros is moderate and over a three year period, the rafts save a lot of money.

“What’s so remarkable about our village,” explains Tahmo Cahyono, the village chief, “is that during the rainy season, the fields are completely flooded. In the dry season, though, they are unbelievably dry.”

“Initially, we were ridiculed for thinking this up”, Feri Rianto, co-ordinator at the climate field school says. “But by the end of the season, the results we achieved were persuasive.”

ACT Alliance is fully committed to reducing disaster risks in addition to responding to humanitarian crises through our presence deeply rooted in the societies in over 100 countries. We enable local capabilities for ‘Preventing and Mitigating Disaster Risks’ before, during and after disasters.