A multifaceted project that spans three South Asian countries is the winner of the 2021 Resilience Award. 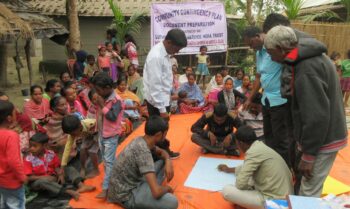 “It was really a very difficult decision, there were so many innovative and interesting projects, but in the end, we chose this one because of its many dimensions and impact on a great number of people,” said Julius Mbatia, ACT Climate Justice manager. The selection was made from 14 worthy entries by ACT’s Climate Justice Reference Group and the ACT CoP on Climate Change Adaptation and Disaster Risk Reduction.

The Transboundary Flood Resilience Project was awarded the $6,000 US Resilience prize at an ACT Climate Justice meeting in February 2022, where project representatives spoke about their project and its impact.

The project addresses climate-related flooding and soil erosion where the Gandak-Ganges/Brahmaputra and Padma River basins converge, upstream from the mouth of the Ganges at the northern tip of the Bay of Bengal. The two river basins and their tributaries traverse heavily populated areas. Floods regularly cause heavy loss and damage, including to human life.

The project has helped the communities develop and enhance a disaster warning system that incorporates both technological and nature-based knowledge.

The project incorporates local traditional knowledge and Indigenous practices, so that bird and animal early warning signals are tracked. “Nature-based solutions are some of the most influential activities the project has supported,” note the implementers.

As a result of the project, communities now use indigenous and local seeds to help with disaster resilience, planting fruit and trees along the riverbanks to help manage flood impacts. They are engaged in environmental protection and biodiversity conservation. Organic integrated farming is on the rise. Locally available materials ranging from banana leaves to bottles have been adapted for use during floods, for example, as flotation devices. Outreach to local forest groups has led to a growing number of forest-based green enterprises and livelihoods.

The Transboundary Citizen Forum (TCF) was created to encourage collective advocacy on cross-border issues. It also builds local capacity and encourages knowledge sharing between communities in all three countries. TCF advocacy has resulted in greater commitment from national and regional governments to emergency preparedness training in the communities. The TCF has equal representation of women and men, due to involving women in all project activities.

The partnership between communities and local governments has contributed to local ownership of the program and to local solutions for disaster preparedness. It has strengthened participatory policy and planning processes that address the needs and priorities of communities. This includes grain and seed banks and access to crop and livestock insurance.

Local government has endorsed the initiative in their fiscal policy, a commitment that will continue after the project is phased out.

Links between upstream and downstream communities at the national and transboundary level have contributed to their greater understanding of shared socio-economic and cultural values and this has eased existing tensions due to political boundaries.

Information about the program is widely shared through collaboration with researchers and academics, and through newsletters, journals, and workshops with the stakeholders and in South Asian networks.