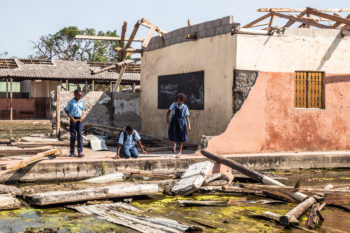 A total of 13 202 classrooms were destroyed by the cyclone and floods. 90,000 pupils have been out of school since Cyclone Idai. Photo: Natalia Jidovanu/ FCA

When diplomats from all over the world meet in Bonn this week to discuss climate change, they have great momentum to build on. From a surge of youth from all parts of the world mobilizing for climate justice and #Fridaysforfuture, to a strong push from Civil Society for ambitious climate policies at the EU Elections, to growing conversations for a Green New Deal making headlines in the USA and Canada. The global momentum for climate justice is growing.

However, this momentum is also built on tragic climate impacts which have inflicted pain and loss on communities. Since the last formal UN Session on climate change, communities have faced an arctic blast in North America, devastating Cyclones Idai and Kenneth in Southern Africa, a looming drought on the horn of Africa, and most recently a deadly heat wave in India. As the number of climate-related disasters increase, so has the call for climate action.

Over the next two weeks of the UN climate talks, momentum has to be turned into progress. A number of important topics will be addressed, including loss and damage, carbon markets and the rules for climate finance. Although the meeting itself is not the platform for large decisions to be taken, it is an important space for parties to negotiate together and try to move towards consensus before the next climate conference in December (COP25) taking place in Chile.

One of the topics that we hope to see progress on is loss and damage. ACT Alliance engages with vulnerable communities and people around the world, and in doing so, ACT members witness the harsh realities posed by climate change on the most vulnerable. The people that are facing loss and damage due to climate related disasters need urgent support- not only in immediate/ humanitarian relief, but also support to rebuild their lives and livelihoods.

Within the UNFCCC, loss and damage is handled by the so called, “Warsaw International Mechanism for Loss and Damage”. It is now time to review the Mechanism, and one of the issues that ACT Alliance is advocating for is to review the possibilities for support for those affected by loss and damage, recognizing that there is a specific need for finance to respond to climate-induced losses, on top of already existing humanitarian flows.

The Bonn Session is not only the space for formal talks about rules and reviews. It is also the last major meeting before the Climate Action Summit taking place in New York in September. The UN Secretary General António Guterres has invited world leaders to come, “not with beautiful speeches but with concrete plans for the required climate action”.

There is a clear momentum for action to be taken immediately, and with this Bonn session, and the upcoming Climate Action Summit, there is great potential for this. I hope that governments can feel this, and that they take the opportunity to push for increased ambition as they begin their negotiations today. We can end global warming and we can fight climate change! 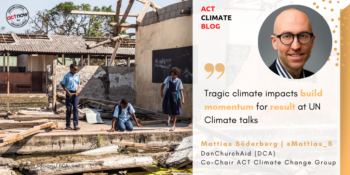