Impoverished communities everywhere suffer the worst effects of climate change and women and men, boys and girls experience those effects differently.  Structural obstacles and cultural factors make women especially vulnerable. We know, for example, that sexual violence is positively correlated with natural disasters, that more women drown in floods than men and that women’s income-earning ability can take far longer to recover than men’s after a disaster.   As families adapt to or recover from extreme weather events, women’s domestic burdens increase, and their needs are overlooked.

Less visible, but potentially as damaging as floods or droughts, is the absence of women from the meetings where authorities plan how they will respond to climate change. These are the conversations where national plans to tackle and respond to climate change are developed which, in turn, are communicated to the UNFCCC. These conversations must actively include the needs and solutions of those who are most at risk.  Rarely, though, do we see enough women represented. We have all heard that women are too shy, too busy at home, or too ashamed that they cannot read to take part in meetings. This has ramifications as much at the community level as it does at the national, and international level.

Present normally at such discussions are governmental negotiators and civil society representatives, groups in which – all over the world –   women continue to be significantly underrepresented, or if present, are often lacking in power to influence outcomes to their benefit.   A paradox thus emerges: women and girls’ disproportionate vulnerability to climate change is inversely correlated to their ability to address it. Not only is this situation unfair, but it is also irreparable unless specific, targeted attention is given to it.

To its credit, the UNFCCC has taken action to try to tackle the issue.  The Lima work program, established in 2014 and being revised at COP 25 in 2019, acknowledges that gender inequality is a challenge for the operationalization of the convention.  It requires that country parties consider the gender composition of their national delegations, develop gender-sensitive climate policies and build women’s capacity to participate in climate negotiations.  It encourages parties to incorporate gender-sensitive approaches in their national plans, use gender-disaggregated data, and identify measures to address the specific needs of women in adaptation, mitigation, resilience building and loss and damage.

The Lima program extends its commitment beyond the formal, national level, governmental forums to informal community-level groups.  These are the places where women most often struggle against local customs and traditional patterns governing their roles or are relegated to traditional productive and reproductive roles.  When they are organized in women-only or in indigenous, environmental, LGBTQI or other special interest groups, other socio-political obstacles can prevent their full participation in national consultation processes.

Yet we know that broad, consultative participation is needed for successful plans. Women’s involvement is thus a necessary precondition for the realization of national climate change plans and the convention itself.  As we all now try to scale up our climate action during the next decade, let’s use the Lima work program to make women more visible and more vocal in all aspects of our climate solutions. 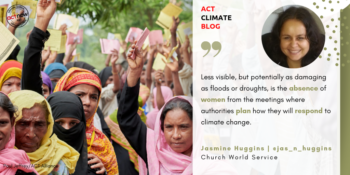