Side event of the Asia Pacific Faith-Based Coalition at the 2020 U.N. High Level Political Forum: It’s now or never 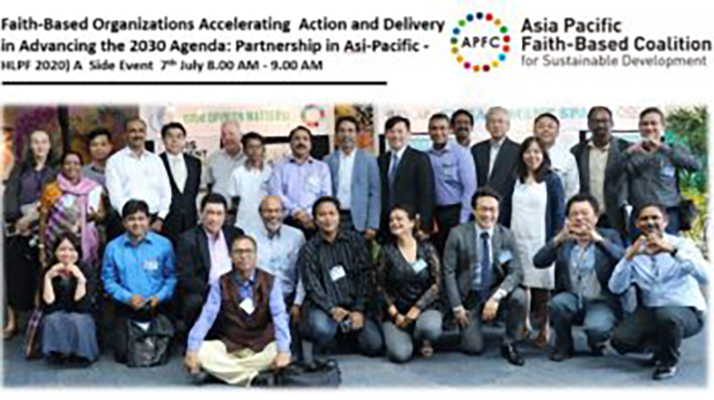 Whether an activist, a representative of the UNHCR, or a scientist, all participants at the official side event co-organized by ACT at the U.N. High Level Political Forum in New York agreed: Faith-based organizations play a decisive role in society. All of them see the current situation created by COVID-19 as an enormous disaster, but also as an opportunity to create a better “New Normal” and to get ahead in addressing urgent issues.

Asia Pacific Faith-Based Coalition for Sustainable Development” (APFC), where ACT Alliance is one of the founding members, hosted the side event “Faith-Based Organizations Accelerating Action and Delivery in Advancing the 2030 Agenda: Partnership in Action in Asia-Pacific“ on July 7. It was of great interest, especially for those who work for faith-based organizations (FBOs) around the world. The objective was to explore the role of faith communities and faith-based organizations in realizing the decade of action and delivery in advancing the 2030 Agenda in the Asia-Pacific region through effective partnerships among FBOs and with states, international organizations and civil society groups. It also sought to identify potential obstacles to fulfilling the role, and to explore ways to overcome those.

The social activist and winner of Alternate Nobel Peace Prize Swamy Agnivesh started with a critical view of the religious establishment, which in his eyes is highly patriarchal and cements injustice in this world. He reminded that there were so many sects and sub-sects which found a very good way to call themselves faith-based, but that in fact there was only one faith, one God and one universe, and that we were all part of a human family. According to Swamy Agnivesh, nature is an integral part of the universe. Therefore he stated: “Belief in God also means respect for nature, for the environment, for human rights and the equality of all people. The real God is love, compassion and justice”.

The role of the coalition

The Asia Pacific Faith Based Coalition for Sustainable Development (APFC) brings together ACT Alliance, Arigatou International, Islamic Relief Worldwide, Soka Gakkai International, and World Vision International. James Munpa and Cyra Bullecer from the ACT Alliance highlighted the contribution that faith-based organizations made to sustainable development. APFC-members including ACT Alliance are active in more than 20 countries in Asia and the Pacific, supported by over 1.5 million staff and volunteers, and with a budget of over four billion US-Dollars. They are deeply rooted in communities, complementing the localization agenda by being local, but strongly connected with the national and global levels. They are rights-based, promote social cohesion and contribute to risk prevention, reduction, humanitarian action and development wherever they are.

Shinji Kubo, UNHCR representative from the Philippines, noted that the timing for this event could not have been better “…as we are starting to debate the latest progress of the SDGs, when COVID affects the lives of millions of people around the globe. It is an unprecedented wake-up call reminding us all of the inequalities, division and failures that had to be addressed in the 2030 agenda,” he said, highlighting that: “Apart from the massive COVID-related response, it is important to remember that the SDGs are the compass to build a better post-pandemic society in the ‘new normal”.

The role of faith-communities and FBOs, according to Mr. Kubo, is critically important, now more than ever, especially when addressing the local- and the community-based approach. “Faith-based organisations and communities, especially through powerful coalitions such as the APFC, can meaningfully continue to drive a progress across the SDGs through building communities which are more empathetic, more equal, less fearful, less polluted and more in tune with nature. UNHCR and other agencies are looking forward to continue the partnership with the APFC”, he summarised.

Katherine Marshall, Senior Fellow at Georgetown University’s Berkley Centre for Religion, Peace and World Affairs, regretted that the world of faith-based and not faith-based communities was so divided. Concerning the role of FBOs in advancing the 2030 agenda, the potential obstacles and the ways to overcome those, she highlighted six points:

The universal human rights are the grounding for our different institutions and for bringing us together. The SDGs, which were approved by all countries, provide a compass for these principles.

The COVID-crisis has shown the unfairness and injustice of different opportunities in life that affect people across the world. The question is what we can do against inequality, for this principle of leaving no-one behind. FBOs have an extraordinary ability to enrich the global (human rights) agenda with this compelling urgency of action. This role of engagement is of vital importance.

3) Faith-based organisations are affected by shrinking space for CSOs

In forums talking about the shrinking space of civil society organisations, people often don’t mention the faith-based ones. It’s important that the religious component comes out much clearer in that discussion.

We need religious communities to be at the forefront of one of the world’s most critical challenges.

This demand applies particularly with refugees and other marginalized people like street children: We need to give the resources and the common view to these communities.

Education might be the challenge for the next months and years ahead with 1.5 billion children out of school. Religious communities are very much engaged. What will education look like in the future?

It’s a unique moment in history and important to rethink of what we need to do differently. Faith communities have a capacity to see the reality but also the vision for the future. If we don’t take this opportunity now, we will never have it again. So many are conscious that it is urgent, because our planet and the faith of our children lies in the balance.