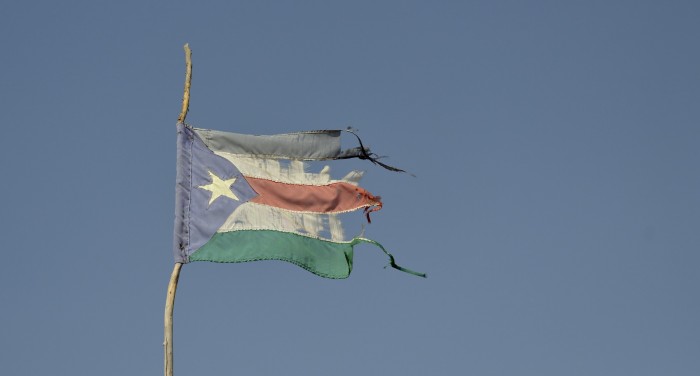 The flag of South Sudan, a little worse for wear, flies over the market in the town of Alek. Photo: Paul Jeffrey

The renewed fighting in South Sudan has raised serious concerns around safety and security of the people of the new, and increasingly fragile country. The situation has rapidly deteriorated over the last couple of days, with a reported death toll of nearly 300 people, and armed violence erupting in Juba and surrounding areas.

South Sudan, which has just marked five years of independence has experienced a politically instigated civil war since December 2013, occasioned by a conflict between President Salva Kiir and Vice president Riek Machar. A peace deal was reached in August 2015.

“We are alarmed by the developments and concerned that what was achieved in the last decade and through last year’s peace agreement may be lost in a matter of days,” said Pauliina Parhiala, ACT Alliance Director.

Church leaders and churches in South Sudan have decried the violence and called for its cessation. In a statement the South Sudan Council of Churches, said: “We, the leaders of the Church in South Sudan, are extremely disturbed about the fatal shootings which occurred in Juba on the evenings of 7th and 8th July 2016 and the morning of 10th July. We make no judgement as to how or why they occurred, nor who is to blame, but we note with concern that there have been a number of incidents recently, and that tension is increasing.”

“We condemn all acts of violence without exception. The time for carrying and using weapons has ended; now is the time to build a peaceful nation,” the statement further said.

With the renewed conflict comes an important humanitarian mandate to protect and safeguard the lives of innocent people in South Sudan, ACT Alliance said.

“While we join our members and the voice of churches in South Sudan to call for peace and immediate end to the violence, we also highlight the absolute need that those resorting to violence and the international community ensure humanitarian access for the sake of the affected populations,” said Parhiala. “International Human Rights Law and humanitarian principles remain sacrosanct and must be upheld without exception, by all.”