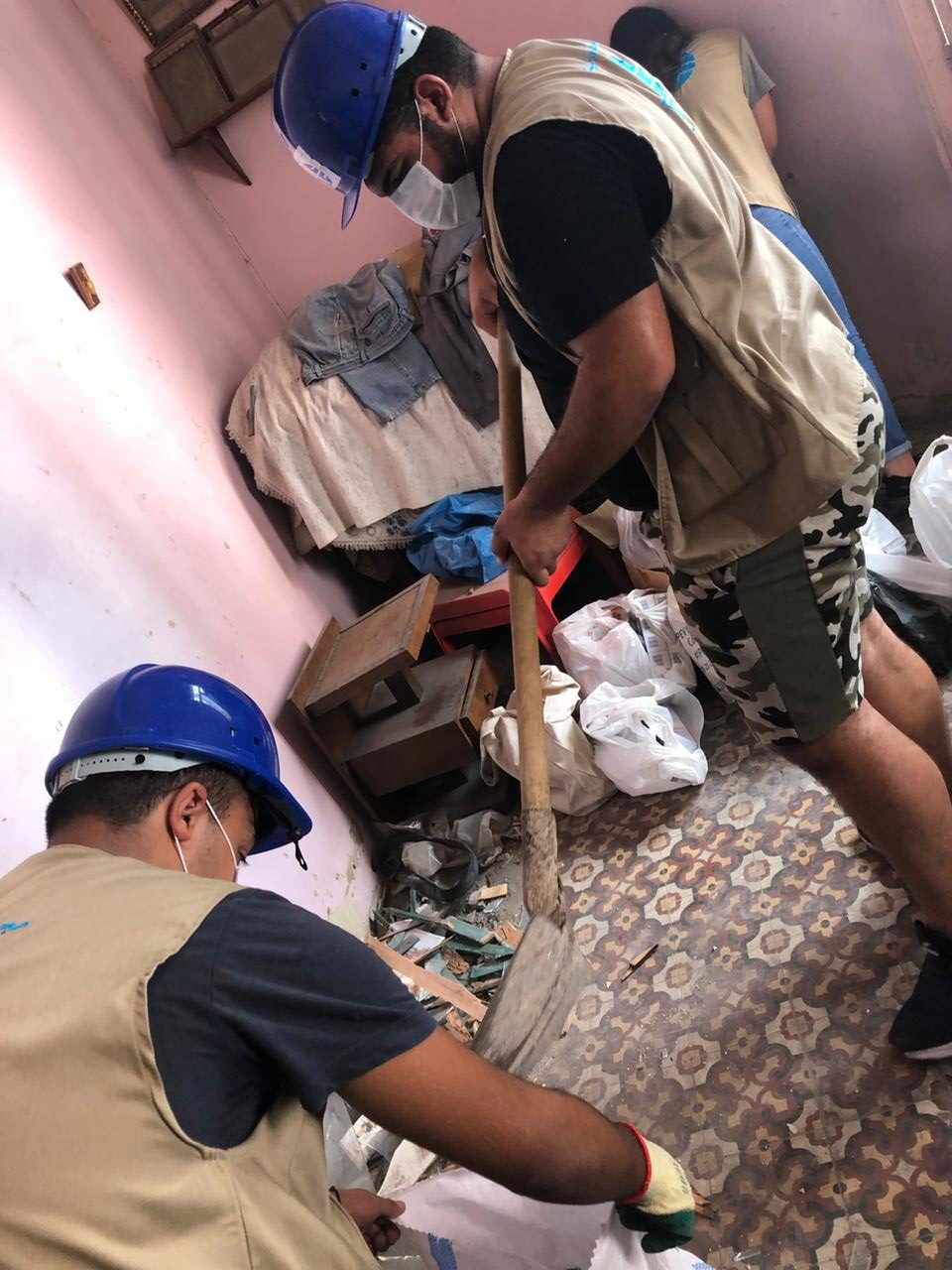 DSPR-JCC volunteers helping clean up after the Beirut blast of August 4, 2020, which displaced hundreds of thousands. Photo: DSPR-JCC

The landscape of Beirut and the lives of hundreds of thousands of its residents, changed in an instant on the afternoon of August 4, 2020. At 18:00 local time, over 2700 tonnes of ammonium nitrate exploded in a warehouse in the port of Beirut, killing hundreds, injuring thousands, and displacing over 300,000 people.  “Hundreds of thousands became homeless in seconds,” said Sylvia Haddad of ACT member Department of Service to Palestinian Refugees (DSPR)’s Joint Christian Committee for Social Service in Lebanon (DSPR-JCC).

ACT members, including DSPR and the Middle East Council of Churches (MECC), began to respond through the local churches and their programmes. “Every helping hand was needed,” Haddad said. “A JCC youth group in Dbayeh camp insisted on going to Beirut to help.”

The youth, along with everyone else who could- including people living with disabilities- pitched in to clean up. The blast levelled buildings, shattered glass, and destroyed homes and livelihoods in a wide radius of Beirut.

Beyond assisting with the cleanup, DSPR-JCC began to support affected vulnerable people in four camps around Beirut, providing food vouchers, food, hygiene supplies, and helping to meet household needs.  “ACT Alliance gave us our first support from their emergency funds [Rapid Response Fund] while we approached other donors for help,” Haddad said.

In addition, MECC prioritized giving unconditional cash or vouchers to affected families. “Unconditional cash lets people buy what they need, and respects their privacy,” said Samer Laham of MECC. “We also gave unrestricted cash so people could buy what they need from the local market.” This cash allows the local economy to pick up, and for local farmers and merchants to be supported.

Haddad also sees the value in providing cash to affected families. “Cash is the best in this context- people do not always prefer lentils and rice,” she said, noting that cash allows them to buy the food that is best for their family needs.

Laham noted a continued need and role for churches in the response to the blast. “People need moral and spiritual support to absorb the trauma,” he said. “They will also need help to cope with the approaching winter, and with their children’s education needs.”

MECC and DSPR, along with Christian Aid, Diakonia Sweden, and Norwegian Church Aid, have joined in launching a $3.2 million appeal for ACT’s humanitarian work in responding to the Beirut blast.  The appeal will target 40,480 people living in the affected area who lost family members or property to the explosions. Particular focus will be placed on supporting children, women, the elderly, people with disabilities, and vulnerable families who do not have the financial capacity to cope.

The full appeal can be read here, and those wishing to pledge to the appeal are asked to email George Majaj, Humanitarian Programme Advisor for MENA.