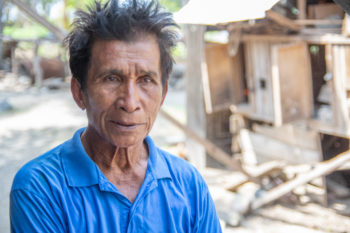 Mr. Mushki is a fisherman from Pantoloan village near Palu, Indonesia. He was out fishing when the earthquake struck, and the resulting tidal wave tossed him and his boat ashore, knocking him out and destroying the boat. ACT member Pelkesi’s mobile clinic helps with treatment for his injuries. He hopes to get back to fishing again, as it is what he has done his whole life. Photo: Simon Chambers/ACT

“There was a rumbling sound, and then an explosion.  I looked up and a tsunami wave was towering over my small fishing boat,” said Mr. Mushki, a 57 year-old fisherman from Pantoloan village near Palu, Indonesia.  “The wave picked up my boat and tossed it in the air, then it landed back on the water, with me still inside.  I blacked out.”

The explosion he experienced was the tsunami wave splitting at the estuary near his village, with one part of the wave travelling inland, the other racing down the bay to Palu.

When he woke, his boat had been tossed ashore, broken in two, near the wreckage of homes that used to be his village.  The impact had given him a few injuries, but he was able to go and look for his family- his wife, eight children and eleven grandchildren.

They had sought shelter further inland.  This was the good news.  The bad was that not only his boat had been destroyed, but his home as well.  There weren’t two stones left standing on each other.  Mr. Mushki’s family now lives split between two tent communities in Pantoloan, and he is contemplating what to do next.

“Some of my children are working, but they only earn enough to support their own families,” he said.  “I’ve been a fisherman all my life.  I want to get back to fishing, but can’t do that without a boat.”

Three members of the ACT Indonesia Forum have joined in an appeal for relief efforts after the devastating 7.5 magnitude earthquake that triggered the tsunami, which killed over 2,000 and displaced over 200,000.  The ACT appeal will benefit 100,000 people affected by the earthquake, tsunami, and liquefaction that followed in their wake.  The full appeal can be found here.

Mr. Mushki remains positive in his outlook.  “I’m lucky,” Mr. Mushki concluded, “I survived.  And so did my family.” 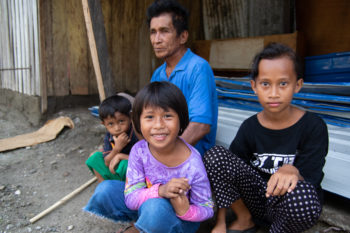 Mr. Mushki and three of his grandchildren sit near the remains of their house. Photo: Simon Chambers/ACT