There is no climate justice without gender justice [Media release COP26]

There is no climate justice without gender justice

“Speeches and agreements are not enough to ensure gender justice. Words must be followed by action,” says Birgitte Qvist-Sørensen, ACT Alliance Moderator. “Gender inclusion cannot be just an exercise of ticking boxes; it needs be turned into robust 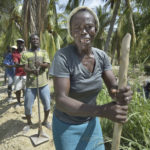 action that fosters both women’s agency and gender equality.”

Gender has long been an integrated element in the climate debate. Despite decisions and work plans, we have not seen necessary transformative change. The lack of female leadership can be noted at the UN climate talks, where men still dominate both in numbers, and in discussions and negotiations. It can also be noted in the implementation of climate-related projects, where gender concerns are not always addressed. Some climate solutions even run the risk of reinforcing patriarchal norms.

The Nordic countries claim to be frontrunners on both climate and gender policies and they have also, to varying degrees, taken initiatives to ensure that gender is mainstreamed in climate-related projects. For these reasons, members of ACT Alliance in Norway, Sweden, Denmark and Finland decided to assess the integration of gender in Nordic climate finance.

The report on their assessment is called From Words to Action: Lessons from Nordic Efforts to Integrate Gender Equality in Climate-Related Development Finance. It enumerates a number of useful and interesting results, including both best practices and challenges where the work can improve. For instance, adaptation projects have a larger focus on gender than mitigation projects. And while many projects include a gender analysis, they lack concrete activities to ensure that gender concerns are considered in the implementation of the project.

“We know that women and girls are more impacted by climate change. We must be serious about mainstreaming gender in all climate solutions,” says Rudelmar de Faria, ACT Alliance General Secretary. “Gender equality cannot just be words on paper nor can it be siloed into a completely separate discussion.”