There is power in religion and faith in ensuring gender justice 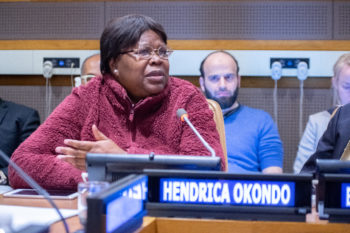 Hendrika Okondo speaking at the 52nd Commission on Population and Development during a side event. Photo: Simon Chambers/ACT

“Not in our name will people die while giving birth,” said Hendrica Okondo during a side event co-sponsored by ACT Alliance at the Commission on Population and Development (CPD) in New York City on April 2, 2019.

“Not in our name will people be discriminated against and denied service.”  Okondo was referencing a multi-faith statement made in 2014 at a UN event. “My call again, as a woman who is working at the local level, and is seeing the faces of young girls and boys who are vulnerable, is for religious leaders to again commit to that statement that was made in 2014.”

The side event Faith-based approaches to sexual and reproductive health from a human rights’ perspective, was sponsored by ACT, UNFPA, UN Women, UN AIDS, Norway, the Commission on Population and Development (POPCOM) of the Philippines, the Faith to Action Network, Islamic Relief USA, World Council of Churches, and the Milstein Center for Interreligious Dialogue.
Mari Skåre, Ambassador and Deputy Permanent Representative of Norway to the UN, said, “There is power in religion and faith, and religious leaders have tremendous influence in the fight for women’s rights.”

“Everyone should be able to decide freely on matters regarding their own body.  However, too many adolescent girls and young women around the world are denied these rights. Norway will remain a staunch supporter of everyone’s right to make decisions about their own body,” she continued.
Okondo was part of the 17-member ACT delegation which came together from five continents bringing their expertise as theologians, doctors, professors, clergy, and gender experts to the discussions at the Commission.

Bishop Stephen Kaziimba from the Anglican Church of Uganda, another member of the ACT delegation, spoke of the need to include boys and men in achieving gender justice.  “I know that in most of the programmes we are talking about women and girls. If the men and boys are left out, then all our efforts are good for nothing,” he said.
“Last year, when I went home after CPD51, I developed a deliberate programme to reach out to boys in schools, and to men,” he continued.  Working with faith leaders from Christian and other denominations through the Faith to Action network, Bishop Kaziimba arranged seminars and advocacy around family planning aimed at men and boys.

The programme was so successful that leaders from other provinces, and even MPs from the Ugandan government have visited to discover how the programme worked.

The Rev. Dr. Lydia Mwaniki of the All African Council of Churches (AACC) described the situation in Africa.  “Many women in Africa face gender-based violence, have no access to maternal health, and too many are dying in childbirth,” she said.  “Faith communities have done so much to provide maternal health and services, sometimes in remote regions where religious services seem to be the only services there.”

Rabbi Burton Vizotsky of the Milstein Center for Interreligious Dialogue at the Jewish Theological Seminary in the USA talked about extreme poverty, lack of education, the lack of jobs, and the lack of direct health care as impediments to sexual and reproductive health.

“How do we begin to push against the trend of governments seeming to push women backwards?” he asks.  “We in the religious communities… need to work together, and to partner with the UNFPA as much as possible.  Whether it is the UN, religious organisations on the ground, or development programmes, there remain ample opportunities to improve women’s reproductive health and educate them.”

Rudelmar Bueno de Faria, General Secretary of the ACT Alliance, was the final speaker and underscored the need for strong action to ensure gender justice.  “If we will not engage with feminist and civil society organisations, faith-based organisations, governments, and the UN, to support this agenda of fighting against exclusion and gender inequality, we will not be able to advance as humanity.”