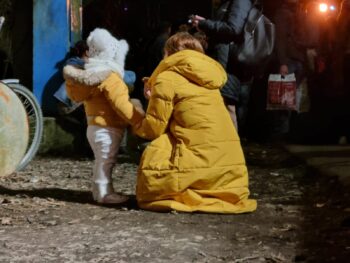 As the war in Ukraine began on February 24, tens of thousands of Ukrainians became displaced, fleeing for safety in neighbouring countries.  ACT member Hungarian Interchurch Aid, who have been working in Ukraine for more than 25 years in humanitarian and development projects, has already shipped 28 tons of food to support those fleeing to Hungary, and their staff have been working with refugees at the Ukraine/Hungary border.

Here are some stories from three of those seeking refuge from the war about their journeys to the Berehovo border crossing.

“We are medicine students at Kharkiv University. This month was already very tense, so we knew that we had to be ready to leave any time. Nevertheless, on the morning of the 23rd when Russian troops crossed the border, we didn’t know what to do. With the sound of shelling coming from not too far, we quickly packed everything we could grab, shoved it in a suitcase and decided to try to leave by train. The train station in Kharkiv was utter chaos. We had to fight to get on the train, we didn’t even know where exactly are we going, all we knew is that we have to get out of the city. By the time we managed to get ourselves on the train we could hear the shelling and sporadic gunfights getting closer and closer. When we finally left the city in our severely overcrowded carriage we felt a moment of perhaps false sense of security. We changed trains in Poltava and again had to fight our way on another train to Lviv. It was the seven of us leaving from Kharkiv, but on the Lviv-bound train it was only 3 of us who made it. The Lviv train station has become a hub for new arrivals and people desperately trying to leave the country. People were waiting for a train to cross into Poland, but that train never came. We then decided to try via Uzhgorod to reach Hungary, but we saw that people are already turning back from the border crossing at Cop, that is why we are now trying to reach Hungary from the Berehovo border checkpoint. Many of our friends will never leave Ukraine, some of them have been arrested because they tried to leave, while some are fighting on the frontline. I wonder if we will ever see them again.”

Vitalij brought his wife and son from Hmelnickij to Berehovo. “We managed to arrive here relatively fast because on our way we didn’t take any main routes. The bigger cities are completely inaccessible and the queues can be longer than 10 kilometres.”

Vitalij must remain in Ukraine even though he is no longer able to serve in the military due to health reasons. Vitalij’s wife and son have made contact with friends in Budapest and will find refuge there.

“Leaving my family right now is the most difficult choice I have ever had to take. I can’t leave the country, but they can, and I have to give them the opportunity to live a safer life. At this point I can only hope that our family will be reunited, but we are facing difficult days ahead.”

“My husband is on the frontlines. The women of my family have decided to take our children away from danger. We left Kherson, and decided to reunite with my sister in Dnipro. By the time we were leaving Kherson we heard that Dnipro was being bombed so we had to take a different way. We went where the car was taking us, I don’t remember most of the journey. My children were asking where are we going and I couldn’t come up with an answer. We heard that the Polish border is completely jammed, so we decided to cross the mountains and try to make it into Hungary. My sister is still on the way, I have no idea where she or my nieces are.

“We’ve been standing here at this border checkpoint for more than 5 hours, it is cold and my children are freezing. It is amazing to see that people are here to help, and even just talking to you gives us hope for a better future.” 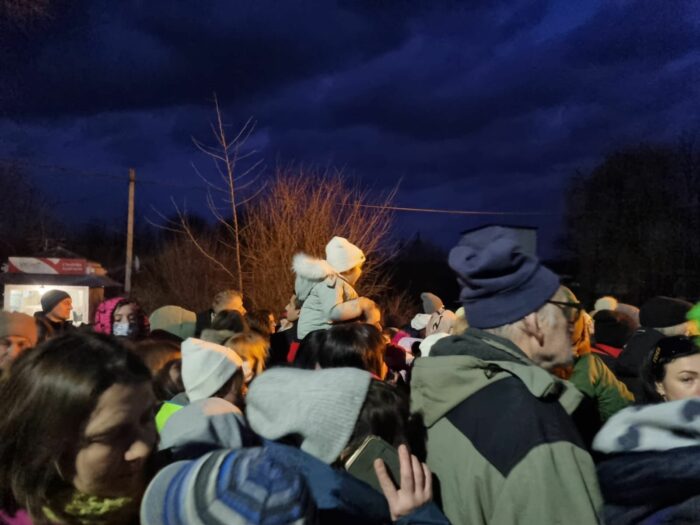