We have faith and hope but our flesh is weak 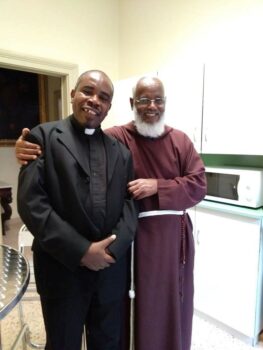 From 18th-20th July , The ACT Angola forum convened a regional  drought and hunger southern region advocacy conference which was held in Lubango, Huila province. The conference was aimed at addressing the prolonged drought in Angola’s southern region provinces of Namibe, Huila, Cunene and Cuando Cubango provinces. As food stocks are depleting, the situation has deteriorated and it is predicted to  worsen during the next lean season when traditionally food stocks run low. Humanitarian assistance  until the next harvest is  therefore needed to prevent further deterioration.

“When I wake up every morning, I see people gathering at our local church. They say the only place they feel safe, respected and receive something is at the church. I receive a lot of people, especially the elderly, women and children” says the Catholic priest ,Father Jacinto Pio, at Chiange local church in Huila province. They say “we have faith and hope but our flesh is weak”. I remember when I advocated to the ACT Angola forum in mid-2012 when the crisis started, to visit the southern region to see for themselves.  “we managed to do something together as faith-based organizations who put the vulnerable communities at the Centre of all what we do”.

We have established a coalition of civil society organizations “Plataforma Sul” which is monitoring and advocating with well-wishers and the government to accept and recognize this situation as a humanitarian crisis. The impacts of drought will not end  in five years . People need immediate support in all sectors to ensure safeguarding their livelihood and remain in their areas of origin.

Every year between June and December,  people  move within the province, outside the province and migrate to neighboring countries in Zambia and Namibia. The elderly and women are left behind after their children and family members migrate. This situation leaves to be more vulnerable to all sorts suffering. These people need immediate support and protection. Children stop schooling to go and search for food and water, and even look after their parents.

The situation has not improved but worsened extending to other provinces of Namibe and Cuando Cubango. The central region has been hit also since last year. “Let us not joke with climate change and its impact. Let us protect the creation so that in turn we live peace with it. This is our obligation instructed by God in the Bible”, says the Catholic priest  during the drought and hunger southern region advocacy conference supported by ACT Angola Forum in July held  in Lubango, Huila province.

The ACT forum members in Angola are  appealing for more support and funding to support vulnerable communities affected by the prolonged drought. The main sectors are food security, Water, Sanitation and Hygiene (WASH), Livelihoods, Preparedness and Prevention, Shelter and Households NFI, Gender and Advocacy.