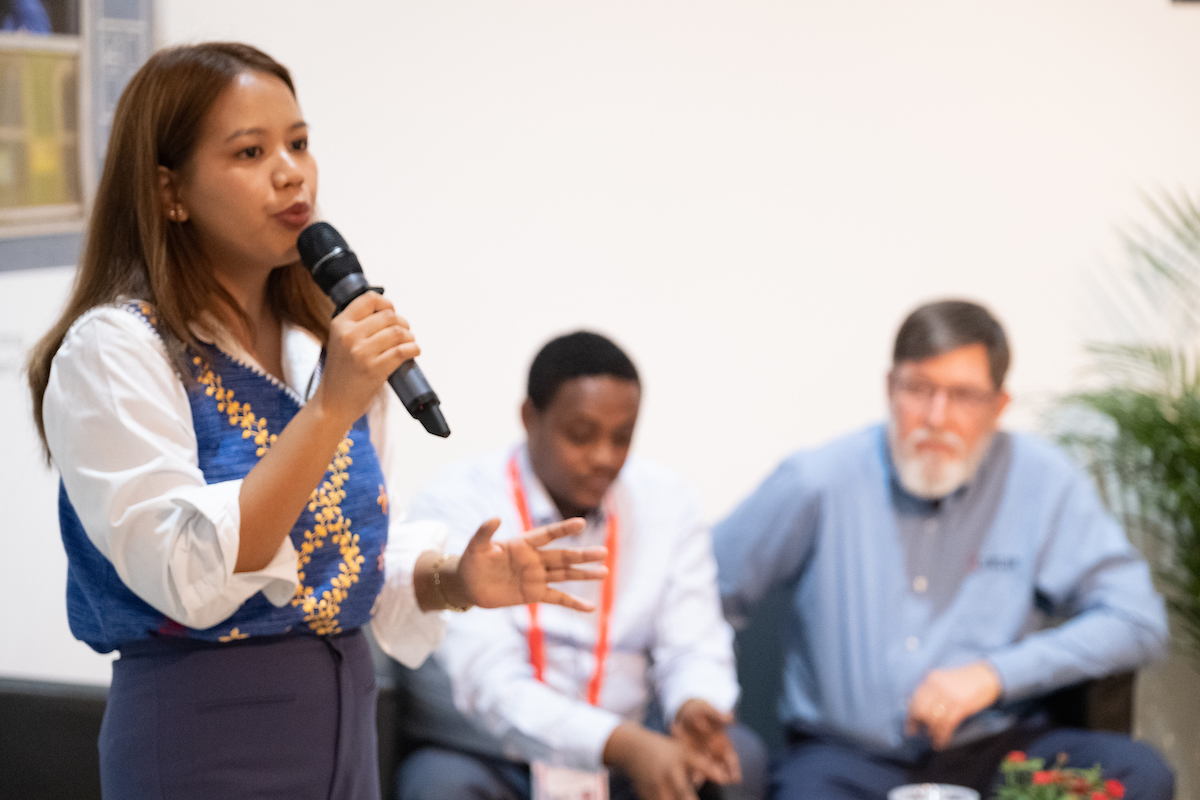 an interview with Patricia Mungcal, National Council of Churches in the Philippines

You are the Youth CoP coordinator and have been the excellent moderator for the new format launched in Karlsruhe the ACT o’clock. These gatherings were supposed to be thought-provoking conversations on difficult topics. What was the hardest and why?

The hardest was definitely approaching racism and decolonisation. These issues are deeply rooted in our daily lives, from the professional to the personal.  For instance, by deciding to come to Karlsruhe I knew I could face discrimination. Whether we acknowledge it or not, these biases are embedded in our systems and also apply to churches, humanitarian relief and development organisations.

We get so much financial support from the global north that it’s difficult to bring this topic to the table preserving its dignity. When discussing “aid”, there is a high risk to sound or being perceived as a beggar.For instance, I don’t want to beg for climate finance! The climate and economic injustices that we have been seeing for decades are now systemic and are perpetuated by political systems that are responsible for creating the premises for these injustices.

Also, in these settings – when we have 30 minutes to discuss loaded topics- it’s a fine balance to preserve the dignity of the issues at stake and the history that many of us share; when for decades we have been treated like subjects to financial “aid” granted by the political whims of some.

Luckily, a conversation has already started. In ACT our churches are already working on it. We are looking at the problems in the face and we are not only acknowledging them but we are “repenting” and correcting our ways. But we need to dig deeper. The fellow panellists participating in the ACT o’ clock were so humble and willing to open up without hubris that it gives me hope.

You are involved in Disaster Risk Reduction  in the Philippines and now that the climate crisis is unfolding faster than expected. Someone said today: Our future is on fire. Climate Change is having an impact on the most disadvantaged communities. I am thinking about Typhoon Haiyan or most recently the floods in Pakistan. What do you think we must do to advance the climate agenda and make communities more resilient and do you think that the Paris Agreement has failed these communities?

I want to talk about what we do at the National Council of Churches in the Philippines. Since Typhoon Haiyan happened we have ramped up our DRR and our climate programme. We have actively involved the local communities. Farmers who are most susceptible to drought;  fishermen in Cebu who are bearing the consequences of the acidification of the oceans; and last June we also included indigenous communities to learn from them and share our knowledges. Since the Philippines is a developing country – and here I bring up the colonisation angle again – climate change is having a hard footprint on our chance to develop. We are trying to meet the basic needs of communities while confronting an uncertain future.

We are doing this by being aware that we “can’t simply “climate adapt” into climate justice”.

That’s why we need to ramp up the advocacy at national and international levels. We must stop open pit mining;  the monopolies of crop farming; the fossil fuels. When it comes to the Paris Agreement, I would like to acknowledge the importance of the common but differentiated responsibilities. It was a win but it is not enough. Those who are most responsible for the climate crisis are not willing to share or be held accountable. As the common but differentiated responsibilities is not a  legally binding agreement we are again subject to the whims of some. I think we need to add binding elements to the Paris Agreement – for instance on climate finance or loss and damage. But that’s the bare minimum.

There is much more we could think about. I think is time to consider this seriously and advocate for it.

As you know we are strongly committed to a localisation agenda which is not just tokenism but authentic. As a member of the ACT Alliance, what do you think the alliance can contribute more to supporting members at the national level and promoting a stronger locally-centred alliance?

ACT has been really serious on the localisation agenda. The alliance sees its importance and was one of the first to take a strong position. This is well and good, but to strengthen it further I think we also need to be serious and aggressive in mobilising the youth. We work at the grassroots level in all sectors. If you want to mobilise communities persuading and involving young people is a very important part of it. Pastors are already doing enough, but if you want committed people who have the energy, the time and the motivation to change the status quo that would be the youth.