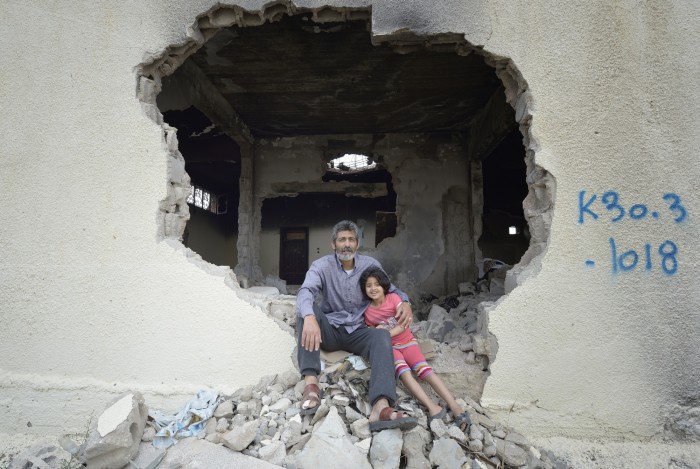 Fawzi Abu Jame’a, with his 7-year old daughter Raghad, sit in the ruins of what was once his parents’ home Khan Yunis, Gaza. Houses in the area were destroyed by Israeli air strikes during the 2014 war between the state of Israel and the Hamas government of Gaza.

The UN’s most senior official, Ban Ki-moon, launched an inspiring call to action to world and community leaders and individual citizens everywhere.  We must invest in preventing and ending conflicts, disasters and suffering, and to comply with international law.

In his “Agenda for Humanity” prepared for the first ever World Humanitarian Summit (WHS) in Istanbul on 23-24 May, the UN’s Secretary General (UN SG) marks the “outrage and frustration…at the lack of global unity and solidarity”.

ACT Alliance welcomes his proposals and in particular, backs his demands for shifting the centre of gravity of the humanitarian system towards local responders; for increasing investment in preparing for disasters, preventing conflict and building resilience; and for a global campaign to “uncompromisingly pursue the protection of civilians”.

When speaking at the UN to launch the report, Ban Ki-moon urged for a reaffirmation of humanity as the driver of our choices:

“Our shared humanity must shape our politics, steer our behaviour and manage our financial decisions” and exposed the “utter lack of respect for the fundamental rules of international humanitarian law”.

The aim of the law of armed conflict, also known as international humanitarian law, is to protect the victims of armed conflict and to regulate the extent to which hostilities can inflict death, injury or destruction on anyone. However, ACT Alliance has observed that the gap between what is legally acceptable and practice is widening. As humanitarians, ACT Alliance’s main concern is that aid gets to those who need it most, safely, and that civilians are better protected.

It is time to take stock, and to act.

Refusals to respect law – indiscriminate attacks on civilians, medical facilities, and schools and arbitrarily denying impartial aid to those most in need – illustrate the urgency of the UN SG’s appeal that the protection of civilians must be placed above the narrow interests of armed groups and forces. The effects of El Nino’s changing and recurrent weather patterns are yet again felt in the Horn of Africa and Asia amongst other places, and we have surpassed the fifth anniversary of calls from Syrian citizens for greater protection. Acting when cities are under siege and people are starving is too little, too late. For this reason, we would urge for an International Law Commission study on the arbitrary withholding of consent to humanitarian relief operations building on work commissioned by UN OCHA, and welcome the attention that the UN SG gives to establishing a “watchdog” to identify early signs of violations in international law. In relation to this we also welcome the attention to gender empowerment and equality, to opening the space for women to lead decision-making, and to eradicating sexual and gender based violence.

These violations of the law undermine the most basic framework for humanitarian assistance and protection, and so the efforts of our local partners.

Yet, civilians, hospitals, schools, medical and relief workers – all supposed to be immune from direct attack, have been recently targeted or have become “incidental loss and damage” in all armed conflicts, even though on the face of the massive civilian losses, the attacks blatantly had not sufficiently distinguished between civilian and military actors, fly in the face of the rule of proportionality, and had not taken sufficient precautions. There seems to be no, or scant, heed to provide effective warning to civilians prior to attacks, but what effect does warning have when those in hospital beds can’t move or cluster bombs are used? It is high time for State parties to the Geneva Convention to accept the ICRC’s assessment that the rule of proportionality is customary international humanitarian law in all armed conflicts. It is also high time for the remaining 93 States to become party to the Convention on Cluster Munitions (1980).

While ACT Alliance welcomes the Inter-Agency Standing Committee’s process for a protection policy, making this a reality requires States and their military planners and commanders to enter into deeper dialogue with frontline humanitarian agencies on how to reduce and prevent the humanitarian consequences of their military decisions, and lead to the “common understandings” proposed by William J. Fenwick, a leading IHL lawyer, so that constant care is taken “to spare the civilian population, civilians, and civilian objects”.

As the UN SG says, the protection of civilians’ interests must be placed above national sovereignty and security. ACT Alliance sees his proposed global campaign to affirm the norms that safeguard humanity as another opportunity to address this. That campaign will however need to be flanked by listening to and supporting local capacities so the humanitarian community can act early enough to major risks. In that vein, ACT Alliance’s commitment, ‘In an expression of global solidarity with poor and marginalized people, we will amplify the voices that promote human rights and international humanitarian law and speak out against social and structural injustice”, responds to the UN SG’s appeal to ‘speak out on violations”, and is one of 11 commitments we have made in response to all five of his Core Responsibilities.

The UN SG’s strong agenda is very welcome, but to make this a reality now the onus is on State leaders to come to the Summit “prepared to assume their responsibilities” and implement commitments that systematically pursue and uphold the norms that safeguard humanity. 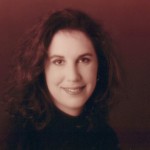 Jane Backhurst work as Senior Adviser, Humanitarian Policy and Advocacy for Christian Aid. She previously worked in the Red Cross, UN, EU development and humanitarian aid, and NGOs, in many countries affected by conflict and severe poverty, in operational, senior management, advocacy, and community protection roles.