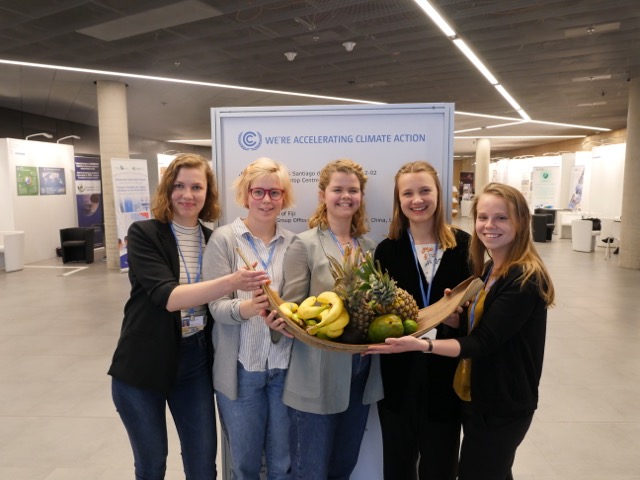 Instead of country delegates, civil society observers fill the Chamber Hall in the UNFCCC World Conference Centre in Bonn. Two young men are standing behind one of the few country-signs: “When we get home, we will give lectures to 5000 young people about the Climate Negotiations,” they say.  They are youth delegates from the Netherlands. In the very formalised setting of a four-hour workshop about involving non-state actors, they convincingly address how youth delegates encourage young people back home to fight for climate justice. This powerful intervention was the first time we encountered the important role that young people have in the UNFCCC.

Walking around the conference area you see young people participating and engaging on all topics. The climate fight is especially important for youth, as we are the ones who will be inheriting the planet. Leaders are not doing enough so we have taken responsibility, leading the climate fight and pushing governments to increase ambitions.

As ACT youth we want to make sure that the decisions in the climate conference reflect human rights, environmental integrity and the common but differentiated responsibilities of the countries.

The involvement of youth is relevant, fair and rational. Youth can break patterns of the past and be innovative in creating a better and fairer world. Changing the structures should be for the better, and by involving youth we can create structures that are sustainable through generations. Not only is influence important, but spreading information and inspiring youth is essential in a fast changing climate. Mobilizing and activating the young offers an opportunity to act rapidly against climate change and work harder for climate justice! With this in mind the youth delegate initiative seems to be an obvious step.

As ACT youth we want to make sure that the decisions in the climate conference reflect human rights, environmental integrity and the common but differentiated responsibilities of the countries. Though the Paris Agreement is ground-breaking in many ways (we actually have an agreement now!) there is still a lot to be done. Promises of emission reductions will not limit global warming to 2 degrees, and definitely not 1.5 degrees. A temperature rise of 1.5 degrees will lead to catastrophic consequences, such as small islands flooding and disappearing. Our job is to make sure that temperature rise is as low as possible and that vulnerable people and ecosystems get the possibility to adapt to changes, and get compensation for loss and damage. To do this, action is needed and promises need to become more ambitious. We are in Bonn to push leaders to set high goals, and hold them accountable.

This is not an easy task, especially when the UN has created its own language about climate issues. Being used to youth slang such as; LOL/LMAO, BTW and BFF, understanding UN slang such as; LMDCs, MPGs, SBSTA and UNFCCC, is SRSLY confusing. Also, when sitting through hours and hours of discussions where nobody ever gets to the point and they yell at each other while still keeping a formal and respectful tone, your brain kind of turns into cake. Still we try to keep our tongues straight in our mouths (as we say in the Nordic countries), when we speak to delegates and important people in suits, and we think we can say with confidence that we have contributed to this conference being fruitful!