Ukraine and Russia: IDPs and Refugees

Since the beginning of the armed conflict in Eastern Ukraine in 2014, nearly 10’000 people have been killed and another 22’420 have been wounded (as of February 2017). The conflict is in its fourth year and constitutes a protracted crisis. Thousands of people left their homes in Ukraine. From Donetsk and Lugansk regions, hundreds of thousands IDPs and refugees fled to the neighbouring regions of Ukraine and Russia as well as to other countries. The number of displaced people continues to increase. By 25th April 2017, 1’583’827 IDPs in Ukraine had been registered and 3.8 million people are in need of some form of humanitarian assistance. As of March 2017, the total number of Ukrainians seeking asylum in neighbouring countries now stands at 434,284 with the majority going to the Russian Federation, Poland and Belarus. An additional 1.3 million is also seeking other forms of legal stay in these same countries. As of the end of 2016, countries of the European Union received 9’625 applications for international protection. Meanwhile, the position of the civilian population in the Non-Government Controlled Areas  remains extremely difficult. Much of the population of these regions have difficulty in accessing basic needs like food, hygiene, clean and safe drinking water, medicines, medical services and other basic services.

ACT members HIA and ROC/DECR plan activities in the sectors of Food Security, WASH, Psychosocial Support as well as Shelter & Non-Food Items in Ukraine and Russia, targeting the most vulnerable IDPs, refugees and conflict affected host community. While HIA will cover both Government Controlled Areas and NGCA in Ukraine, ROC/DECR target regions will be the NGCA in Ukraine and Russia. The follow-on ACT Appeal will start 1stJune 2017 and end 31st May 2018 with a total of project duration of 12 months. 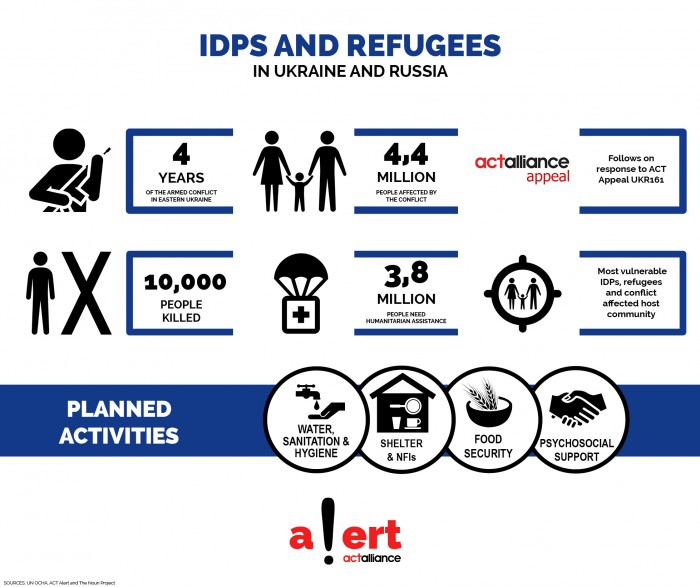