The 2017 Darfur Programme (DP) Appeal marks the 14th anniversary of the joint Caritas Internationalis (CI) and ACT Alliance (ACT) collaboration which commenced in 2004.

As has been mentioned in previous Appeals, the DP has been able to engage with and respond to the protracted humanitarian crisis that has continued to engulf the country. It has been about 13 years since families have had to leave their homes, their livelihoods and their land. To date, the United Nations Office for Coordination of Humanitarian Affairs (OCHA) has, in the 2016 Humanitarian Response Plan (HRP) estimated that the ongoing conflict has left around 2 million Darfuri IDPs in need of humanitarian assistance and support. This does not include the impacts stemming from the conflict which broke out in the Jebel Marra (JM) region, in January 2016 which has displaced an additional 82,000 people throughout Darfur (OCHA Humanitarian Snapshot, September 2016).

The Sudanization process continues to be underway throughout the country. While no sign has been made that this government level strategy will come into full force in the year ahead, the DP continues to forge ahead; engagement and support – at all stakeholder levels – will continue, status quo, into 2017 should Sudanization become a clear reality.In line with NCAs revised country strategy and the context of Sudan (particularly Darfur), the DP will be making a solid effort to support its target communities through building ownership of NCA projects to ensure sustainability and long-term support.This will be done through an integrated and holistic approach; looking to all sectors of the DP to work and support one another instead of in sectoral silos. Examples of proven effectiveness can be seen through the efforts of the Ta’adoud project which NCA is an integral part of. 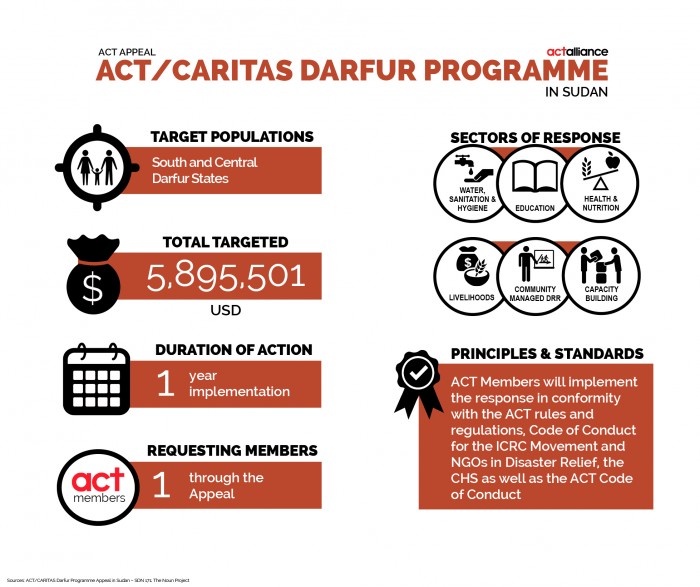