Bangladesh, one of the world’s poorest nations, has seen a massive influx of Rohingya people fleeing violence and persecution in Myanmar. As of 21 Oct 2017, at least 815,000 Rohingyas are estimated to be sheltering in Bangladesh. Violence which began on 25 August has triggered a massive and swift influx and resulted in a critical humanitarian emergency. 603,000 new arrivals are reported, according to IOM Needs and Population Monitoring, UNHCR and other field reports. Population movements within Cox’s Bazar remain fluid, with increasing concentration in Ukhia, where the Government has allocated 3,000 acres for a new camp. Over half of the new arrivals are living in spontaneous settlements with little access to aid.

As this is a cross-border crisis which impacts Myanmar and Bangladesh, a coordinated and complementary humanitarian response among ACT Alliance members in the countries is necessary. Consequently, ACT Bangladesh Forum (Christian Aid, DanChurchAid, Diakonia, ICCO Cooperation) will assist over 60,000 households and 112,600 individuals in Bangladesh by providing Shelter/NFI s, Food Security, Protection/Psychosocial,  Health/ Nutrition, WASH, and advocacy programs. The ACT Bangladesh Forum is requesting for 3,578,740 USD to run the activities. Any indication of funding or other support is encouraged to be made in the name of the ACT Bangladesh Forum, and allocations will be made according to agreed mechanisms among requesting members.

While ACT Myanmar Forum members (Christian Aid and LWF) will respond to this crisis in Myanmar by providing Shelter/NFI s, Food Security, Protection/Psychosocial, Early Recovery/ Livelihoods, Unconditional Cash ,Education, and Advocacy programs. Over 21,000 households and 15,000 individuals will be benefited by this intervention. 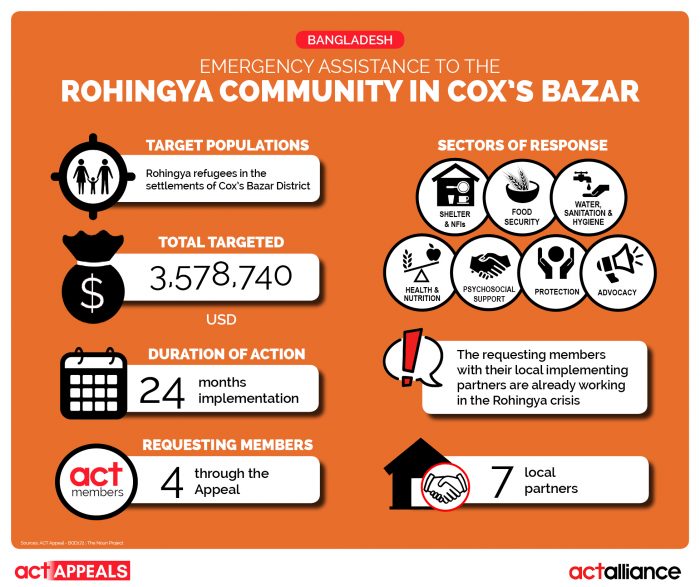