Tropical storm “Nate” formed on Thursday the 5th of October in the Caribbean coast of Nicaragua. The storm caused heavy rains and landslides throughout several countries in Central America. In Costa Rica, landslides caused significant damage to roads and villages, cutting off some areas.  According to the National Emergency Commission more than 11,517 persons are in 178 shelters around the nation after having to leave their homes because of flooding and the risk of unstable ground giving way. More than a dozen main roads were closed, while others were only partially open. In the province of Guanacaste, which has been particularly hard-hit by the heavy rains, many roads were impassable to all but four-wheel-drive vehicles and horses.

A highway that connects the south of the country was washed away in Casa Mata. At least 5,000 residents fled to emergency shelters there, according to the Associated Press. As much of the Costa Rica returns to normal, many communities are still isolated, others without water, and destruction caused by rains continues to be tallied and dealt with. The National Emergency Commission (CNE) on October 9, updated the status of different parts of the country. Much of Guanacaste and Puntarenas, on the country’s Pacific side, remain under red alert, and others have returned to low or no alert as rains have returned to normal rainy season levels.

The Costa Rican government declared a state of emergency, and President Luis Guillermo Solís appealed to the international community for support.  The annual rainy season is currently underway in Central America; a five-month period typically ending in December in which the risk of flooding and mudslides are heightened. This year, some areas in the region, including Costa Rica, have gotten up to 50 percent more rain than average for the months of September and October.

ACT Costa Rica Forum through it local member Lutheran Church of Costa Rica (ILCO) in coordination with implementing partners CSF and ACTUAR are planning to respond to this crisis by providing Shelter/NFI s, Food security, WASH and Livelihoods. Over 1105 households and 5525  individuals will be benefited by this intervention. The ACT Costa Rica Forum is requesting 164,546.04   USD to run the activities. 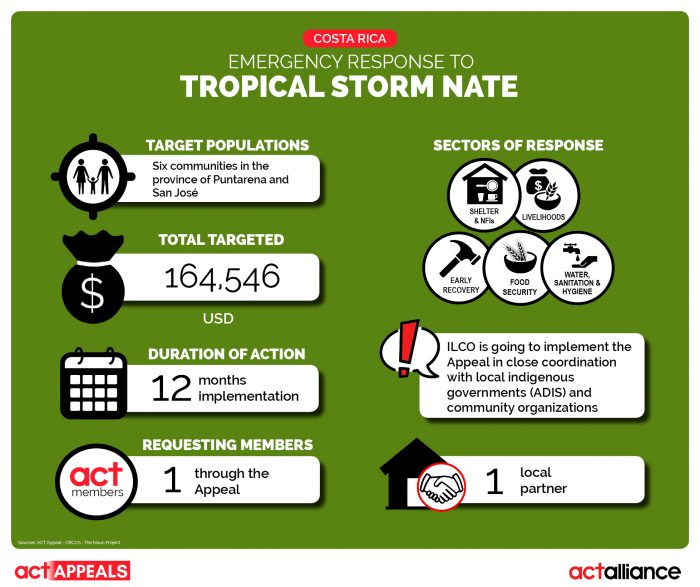