Ukraine and Russia: Emergency response to the crisis affected civilians in conflict zone, IDPs and refugees – UKR171 (Follow on appeal)

The humanitarian situation in Eastern Ukraine remains difficult and continues to deteriorate. This is due to the fighting clashes, which began in April 2014 between militia-armed groups in the Donetsk and Luhansk regions of Ukraine, and the forces and armed groups under the central government in Kiev.

Because of active hostilities, hundreds of thousands of internally displaced persons (IDPs) and refugees continue to flee to the neighbouring regions of Ukraine and Russia. A total of 1,583,827 IDPs were registered in Ukraine as of April 25, 2017, and over 1.2 million refugees are in Russia. In Ukraine, 3.8 million people are in need of some form of humanitarian assistance due to the conflict. The civilian population in the conflict regions of Eastern Ukraine is in dire need of humanitarian assistance, suffering from the ongoing hostilities, lack of access to basic services and financial resources, and the destruction of local social, communal and economic infrastructure.

ACT Alliance members Russian Orthodox Church -Department for External Church Relations (ROC/DECR)  and Hungarian Interchurch Aid (HIA) plan to continue their humanitarian support to IDPs in Ukraine, refugees in Russia and vulnerable war affected civilians in the war regions of Eastern Ukraine to contribute to the alleviation of their suffering by addressing their most pressing needs in the sectors of Food Security, Water, Sanitation and Hygiene, Health/Psychosocial support and Shelter and Non Food Items. The ACT Appeal UKR171 follows on the response to the ACT Appeal UKR161. 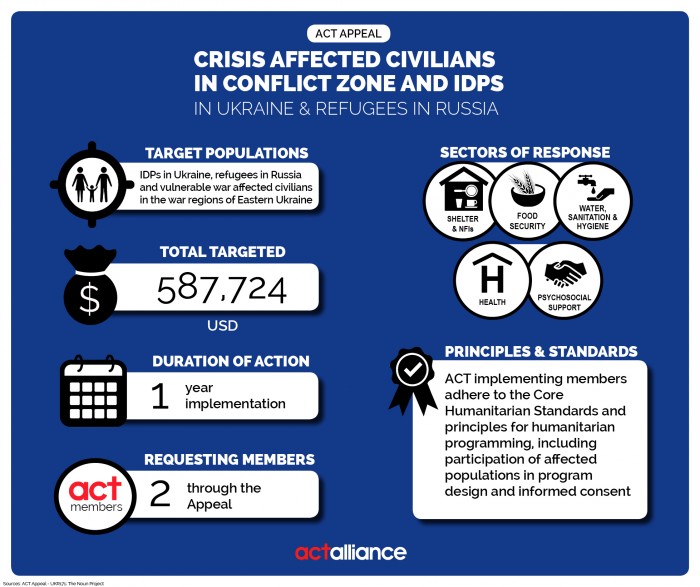