DRC, a vast country in Central Africa attracts less attention from donors probably due to its protracted nature; but continues to be in a humanitarian crisis. In October 2017, in line with UN Policies, DRC Level 3 emergency was declared as a consequence of the complexity of a conflict crisis. The appeal emergency covers the provinces of Kasai, Tanganyika and South Kivu.

The Kasai Provinces in the Democratic Republic of Congo are currently experiencing violent ethnic/tribal conflicts. These conflicts have been fueled by the violent death of Kamuina Nsap the local tribal chief.  The death of chief Kamuina Nsap and subsequent calls among his followers to avenge his death has caused unrest among the population.

An unprecedented massive population displacement has been reported within and outside 5 provinces of Great Kasai which encompass Kasai namely, Kasai central, Kasai Oriental, Sankuru and Lomami to date.

Last year (June 2017), it was reported that 1.4 million people were forced to flee from their homes, escaping violence. Already more than 33,132 people have been reported to have crossed the border to Angola and neighbouring countries. There is also significant internal displacement by affected communities.

The DRC forum has launched a call for action (Full appeal) in response to the Kasai crisis due to the many emerging challenges in this crisis in DRC contextual scope even after DRC ACT alliance forum released the concept note. 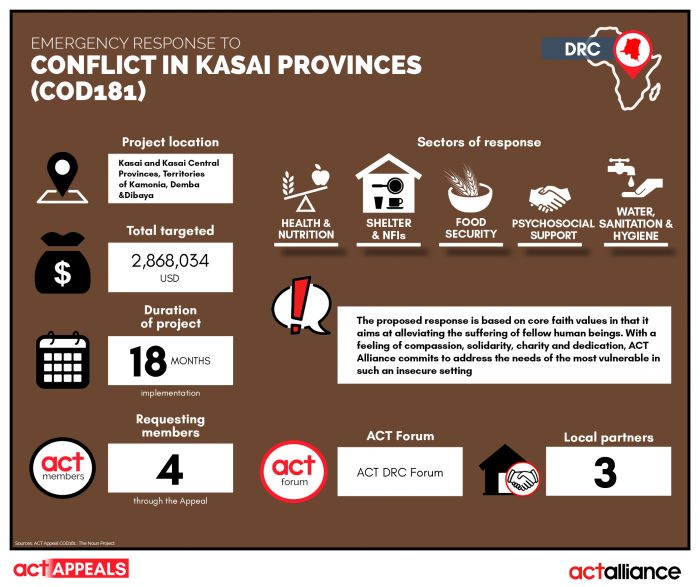