The ZIM161 Appeal has been both revised and extended (for 6 additional months), for the following reasons: i) there are indications of additional funding for the appeal, ii) late receipt of pledged funding for the appeal. iii) an expected peak in the need for food in March-April as people await yields. The proportion of people in need of urgent assistance has increased to 42% of the rural population (ZimVAC, 2016) which is well above the initial projection of 30% used at the planning stage of the appeal. This makes assistance more urgent and critical in the new proposed intervening period of the appeal.

On top of the drought, the crisis started in 2015/16, the incessant rain that Zimbabwe is receiving is already resulting in flash floods that are affecting the logistical movement of grain and foodstuffs. The rains are also disrupting normal agronomic practices such as timely weeding and fertiliser application which might lead to reduced yields. In some areas, the crops have also been affected by armyworm and Agritex reports that in the Matabeleland North Province, 50-70% of the crops have been affected and likely to result in decreased yields.

In Zimbabwe, food security has extremely been compromised by erratic rains in the 2015/16 season. This has put 4.1 million people at risk of starvation during the lean season period of January-March 2017. Highest levels of food insecurity are in the Midlands, Masvingo, Matabeleland South and Matabeleland North provinces.  As the 2016/17 lean season approaches no additional assistance has been received from the government, WFP and other aid agencies.

The ACT Zimbabwe forum through DanChurchAid (DCA), Christian Aid (CA) and other local implementing partners have responded to the 2015/16 El Nino induced drought since March 2016. To date, DCA has reached 12 090 and CA 5360 beneficiaries.  They will continue contributing to immediate assistance to 27 955 beneficiaries through cash transfer programme to enable households to buy food. Early recovery activities will also be mainstreamed throughout the extension period. 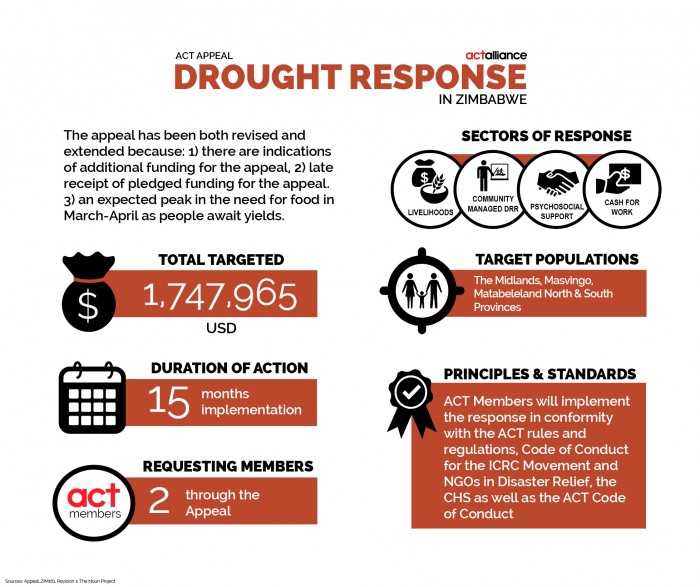