The humanitarian crisis in the six states of the North-Eastern Nigeria has intensified after eight years of violent conflict. In 2016, this was compounded as the Nigeria Government Forces took back territory previously held by the Boko Haram insurgency. The conflict caused widespread forced displacement, acute food and nutrition insecurity and serious human rights violations. Since 2009, 14.8 million people in North-Eastern states of Nigeria have been affected by conflict. Violence caused by insurgency activities of Boko Haram and counter military operations have left widespread devastation to families, infrastructure and livelihoods within the region.

The latest needs assessment carried out in April 2017 by Christian Aid in coordination with the Humanitarian Clusters across Borno, including in Konduga Local Government Areas(LGA), focused on identifying key need gaps for vulnerable populations in the sectors of food security, WASH, NFIs and protection. There are approximately 4.2 million people in host communities and 1.5 million internally displaced persons (IDPs); 54% of the affected population are female and 59% are children. With disrupted agricultural production, poor functioning markets and high food prices, most of the population are dependent on humanitarian assistance with an estimated 3.3 million people food insecure (IPC phase 3-5) with numbers expected to significantly deteriorate during the lean season. There is thus need for life saving support and activities to alleviate suffering through integrated and coordinated humanitarian response focussing on the most vulnerable people.

Christian Aid (CA) has been working in the North-East and Borno state for over 2 years. Ongoing humanitarian operations in Nigeria are being implemented directly by CA or via local partners. This proposed intervention to ACT Alliance will be directly implemented by CA and also through local partners with teams in Maiduguri and Konduga and through partners in Dikwa and Munguno LGAs. 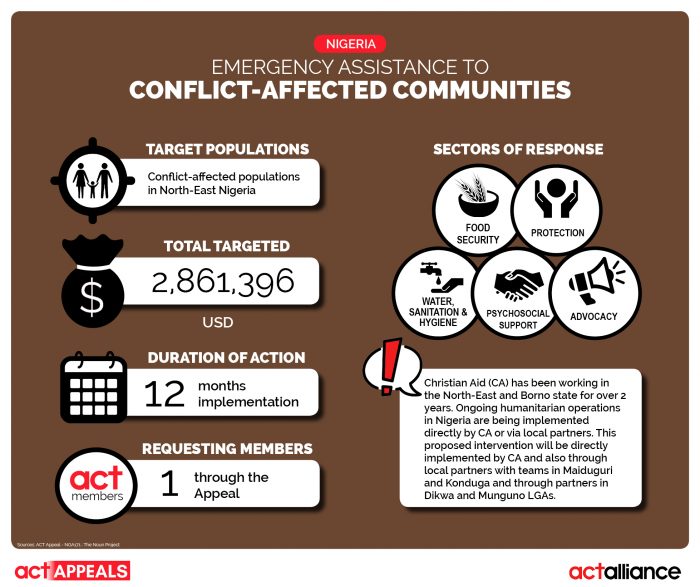