The Kasai Provinces in the Democratic Republic of Congo (DRC) are experiencing one of the most severe crisis in the country’s history. Violent ethnic/tribal conflicts, fuelled by the violent death of the local tribal chief, Kamuina Nsapu and the subsequent calls amongst his followers to avenge his death, have resulted in an unprecedented massive population displacement. These were reported within and outside the 5 provinces of the Great Kasai, which includes Kasai, Kasai Central, Kasai Oriental, Sankuru and Lomami. In June 2017, it was reported that 1.4 million people were forced to flee from their homes, escaping violence. About 33,132 people reportedly crossed the border to Angola. The situation in the Kasai provinces is a complex emergency. According to multi-sectorial needs assessments reports released by a number of humanitarian actors, including Christian Aid, UNICEF, UNOCHA, WAR Child UK and PRONANUT, 2.4 million people are directly affected and in need of multi-sector humanitarian assistance. According to UNICEF’s SitRep, about 1,185,600 children with their parents and 96,000 pregnant women are in need of humanitarian assistance: shelter, food, basic household equipment, education, health, protection, water and basic sanitation.

The ACT DRC Forum (Christian Aid, Lutheran World Federation, Church of Christ in Congo, and Ecumenical Office for Support to Development (BOAD)/The Salvation Army) is proposing an emergency response for 58,279 conflict affected persons in Kasai Region, amounting to $ 2,478,523. This response aims at contributing to save lives and increase the coping capacity of vulnerable populations affected by Kasai Crisis in DRC. 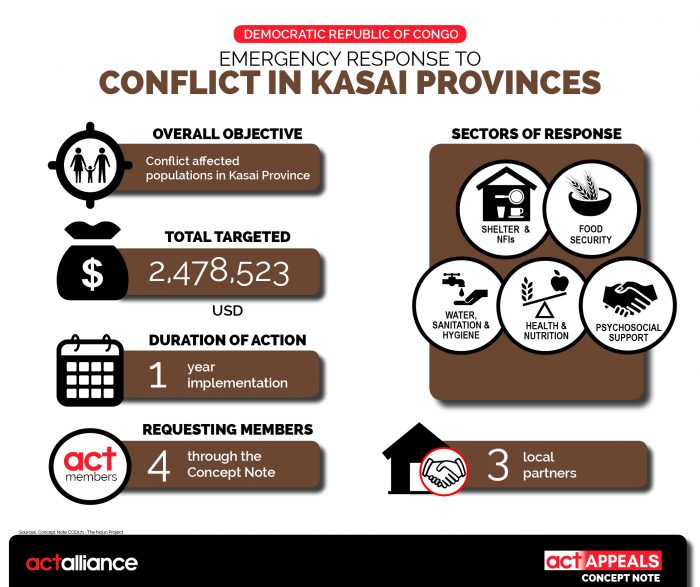