The current floods in Assam have been termed the worst since 1998. The third wave of floods has claimed 67 lives so far in Assam. The total number of deaths in this year’s flood- related incidents has gone up to 151 in the state. Incessant rains leading to floods have wreaked havoc in 25 of the 32 districts of Assam. In Morigaon district, which has been hit hardest, 5.21 lakh people have been marooned while 4.67 lakh people are affected in Barpeta district. In Bihar, the number of dead in the devastating floods in Bihar has gone up to 514 as the situation worsened with more areas getting affected. Around 17.1 million people are facing the deluge covering 2,371 Gram Panchayats (settlement councils) under 187 blocks of 19 districts of North Bihar. According to the Bihar State Disaster Management Department, 854,936 people have been shifted to 1,646 relief camps in different parts of Bihar  While,  in northern districts of West Bengal are reeling under heavy rains and unprecedented floods since July 21 with the state’s disaster management department reporting that the disaster has so far claimed 55 lives and affected 55 lakh people in north Bengal districts – Jalpaiguri, Alipurduar, South Dinajpur, North Dinajpur, Malda and Cooch Behar.

The ACT India Forum is currently monitoring the situation and is ready to respond, providing, temporary shelter, non-food items, food security, and WASH to 8,000 affected households in the coming months. 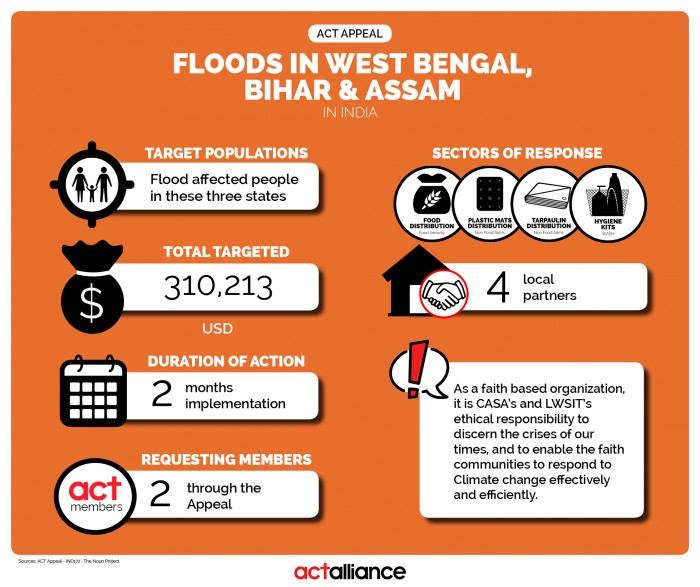