India: Emergency response to the floods in North-Eastern State of Assam – No.RRF 08/2017

There have been heavy torrential rains since 2nd July 2017 in the North-Eastern state of Assam in India. The rains have continued and the floods have intensified in the last 48 hours. 24 districts of Assam have been affected during this current phase of floods. A population of 1,718,135 has been badly affected by current floods and is struggling with the worsening flood situation in the state.

According to a report by the Assam Disaster Management Authority (ASDMA), lately, 7 people were killed in various flood-related incidents in Goalpara, Jorhat and Lakhimpur districts. In Lakhimpur, 3 people were killed by drowning and landslides. The toll in the Assam flood has risen to 44 with five more deaths being reported on Wednesday, July 12, 2017. Approximately 1 million animals, including poultry have been affected and 1,652 houses have been damaged during this flood. Large scale destruction of infrastructure, cropland and wildlife has been reported from different areas. 2,498 villages with more than 140,837 hectares of standing crops have been badly affected due to floods. The flood water has caused widespread destruction in the world-famous Kaziranga National Park, where more than 560 animals, including 14 rhinos, were killed. Road services have been affected at 2,847 places while railway tracks, damaged by landslides in the Lumding-Badarpur Railway division, were yet to be restored. The situation is likely to worsen in coming days as the water level in major rivers is continually rising above the danger level and more rainfall has been predicted by the Meteorological Department of India. 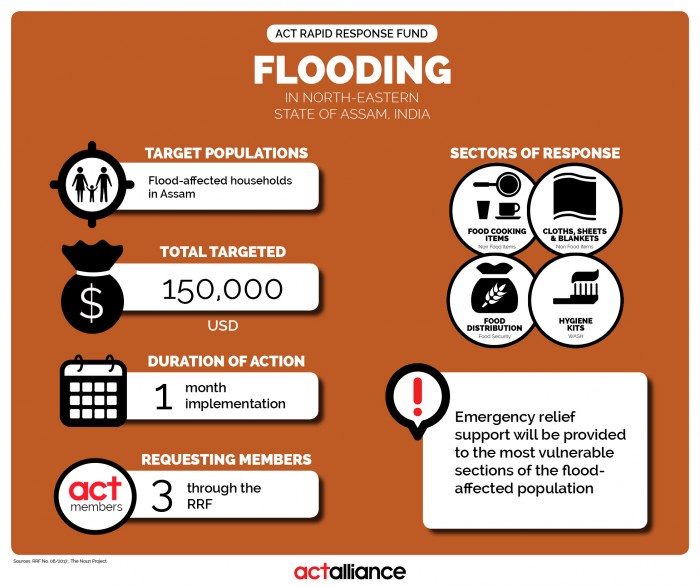