Colombia: Emergency response to the floods and mudslides in Mocoa – COL171

130 mm of rain fell in the city of Mocoa in southwest Colombia between 23:00 on 31 March and 01:00 on 1 April, causing the flooding of the Mocoa, Mulato, and Sangoyaco Rivers, and several mudslides throughout Mocoa. These rainfalls amount to one-third of the average for an entire month for the area. At least 332 people have died, 332 were injured, 106 remain missing. About 17,500 of the up to 70,000 living in Mocoa have been affected by the floods and mudslides, and 3,417 are displaced. 36 of 37 neighbourhoods of Mocoa have been affected.   Areas in southern Mocoa have been the hardest hit, and six are completely destroyed. The registration of victims has been closed, with over one hundred persons still counted as “disappeared.” Now the efforts focus on restoring services and normality to the capital of Putumayo Department.   Thousands of families remain in precarious living conditions, many of them in the 13 formal shelters established by the authorities. Authorities are ensuring that supplies and services are reaching affected populations, both in the 13 formal shelters set up and in the spontaneous settlements in the outskirts of Mocoa.

The ACT Alliance Colombia forum Member, LWF in coordination with a local partner is responding to the emergency and have agreed to address the response to livelihoods restoration. 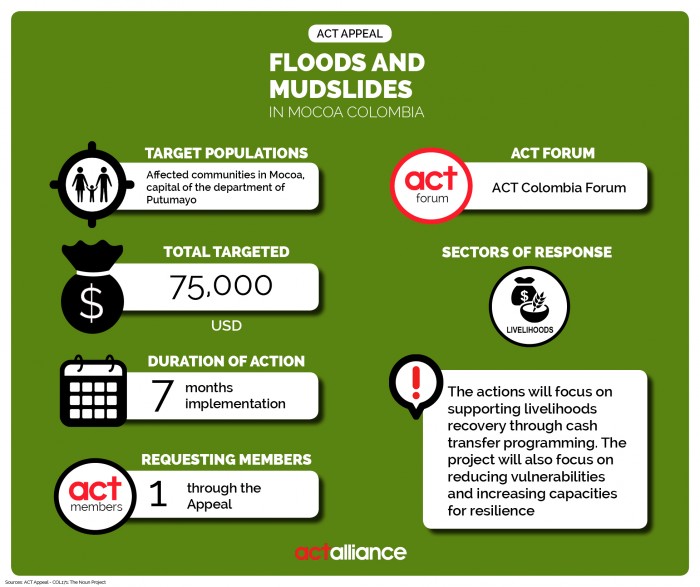