Liberia: Emergency response to the storms and floods – No.RRF 14/2017

In Liberia, since the beginning of this year, there have been constant storms and floods resulting in significant damages and losses. On Tuesday, August 31st, it was reported on the National Radio Station (ELBC Super Morning Show) that a heavy storm had occurred in Bong County (Central Liberia) which caused the destruction of houses thereby leading to the displacement of hundreds of local community dwellers.

There are presently 5,244 people who are affected and 118 houses destroyed in Suakoko Town. 560 persons are without shelters, according to reports received from the National Disaster Committee based Gbarnga, Bong County.Other impacts of the storm and floods include the destruction of school buildings, offices, etc. Other parts of the country including Grand Cape Mount County and Margibi County have also been affected by heavy flooding which subsequently damaged individual houses. As the rainy season is at its peak in Liberia, more storms and potential flooding are expected.

The ACT Liberia Forum through Lutheran Development Services is planning to support the affected communities through the provision of food, non-food items and safe drinking water to restore their dignity and livelihoods. 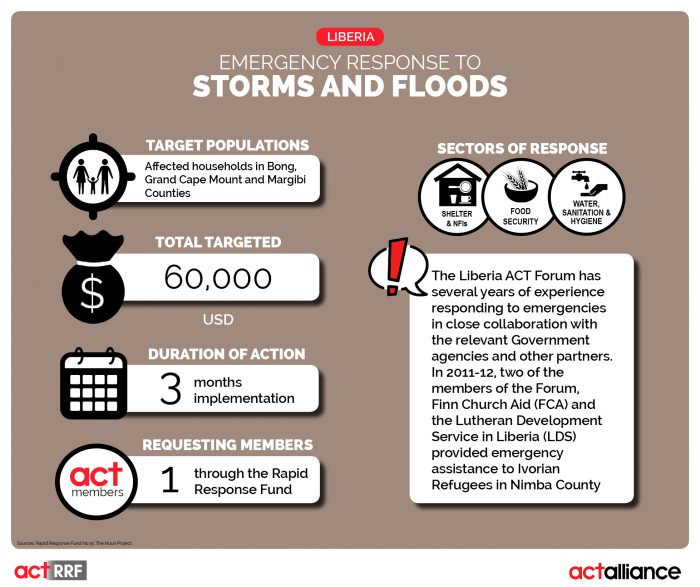